You can play games on any smartphone. But over the past year or two, we’ve seen a growing number of smartphones aimed specifically at gamers. Not only do these phones typically have fast processors and plenty of RAM, but some have additional features like 120Hz displays, liquid cooling, RGB lighting effects, and support for gaming controllers and other accessories.

But the Nubia Red Magic 3 is the first smartphone I’m aware of to support active cooling — there’s actually a small fan inside the phone which will help keep the device from overheating during gameplay.

The phone also has a liquid cooling system, so the fan won’t run all the time — just when you need it. Still, it’s a bit odd that at a time when there seem to be a growing number of fanless notebook and desktop computers, Nubia is adding a fan to a device category that’s been fanless from the start.

Anyway, the phone’s “turbo fan” is just one of the things that makes the Red Magic 3 stand out from most phones. 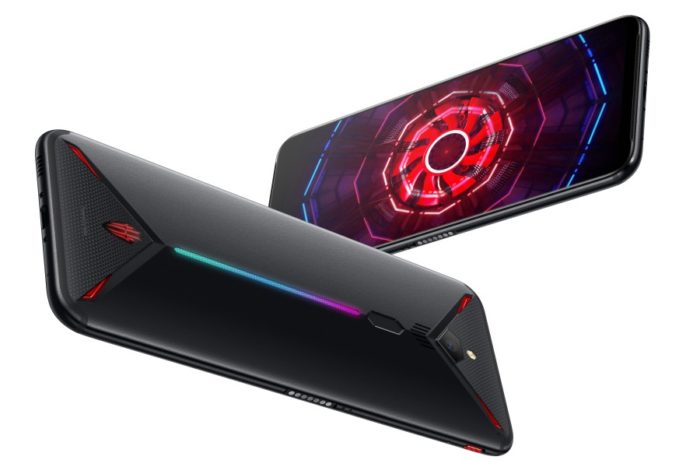 There are two shoulder buttons that you can use to trigger actions in games without touching the display, and you can also use the fingerprint sensor on the back of the phone as a third button.

On the back of the phone there’s also an RGB light strip, and there are POGO pins on one side of the phone that you can use to attach an optional docking station or other accessories.

As for the more traditional specs, the phone packs a Qualcomm Snapdragon 855 processor, up to 12GB of RAM, up to 256GB of storage, and a 5,000 mAh battery with support ofr 27 watt quick charging.

There are stereo front-facing speakers with support for 3D audio and DTS:X sound, and a 3.5mm headphone jack. There’s a 48MP camera on the back of the phone and a 16MP camera on the front.

Nubia plans to offer the phone globally, so it should be available in the US, Canada, the EU, and the UK in May. But it launches first in China, where it will go on sale May 3rd for about $430 and up (for a 6GB/64GB model).