In other words, it has the kind of specs you’d expect from a flagship smartphone in 2016.

But Nubia also describes the phone as a bezel-free devices, which isn’t entirely true: there are top and bottom bezels. But the glass really does seem to stretch pretty much from the left edge of the phone to the left, giving the Nubia a higher screen-to-body ratio than you’ll find on most phones.

ZTE subsidiary Nubia launched the Z11 in China earlier this summer. Now the company has announced plans to bring the phone to 14 countries around the world, including the US, UK, Germany, Italy, India, and Indonesia, just to name a few. 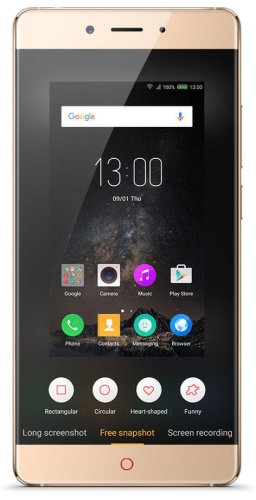 In Europe, Nubia will offer a standard edition model with 4GB of RAM and 64GB of storage for €499. A Black Gold Edition with 6GB of RAM will run €599. There’s no word on the US pricing yet.

Each model features a microSD card slot for up to 200GB of removable storage, a Sony IMX298 16MP rear camera with optical image stabilization and an 8MP front camera, and a 3,000 mAh battery that the company says lasts for “at least” 1.5 days of run time.