Most smartwatches have screens that are circles or rectangles. The Nubia Watch has… something else.

This unusual smartwatch has a 4 inch flexible AMOLED touchscreen display that curves over your wrist, allowing you to see more data at once, while also using the extra space for scrolling and other touch controls.

It’s available for pre-order for $179 and up during a Kickstarter crowdfunding campaign, and should ship in October. Eventually it’s expected to have a retail price closer to $400. 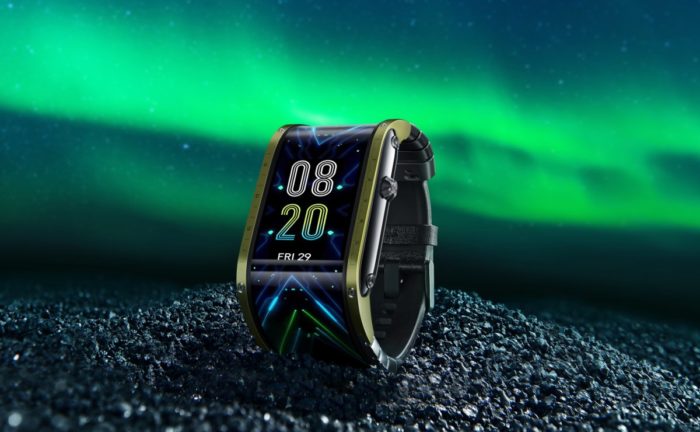 Nubia has been showing off wearable concept devices with flexible screens for a few years, and last year the company released the Nubia Alpha wearable smartphone with a flexible OLED display.

The latest version drops the smartphone features and focused on being a watch/activity tracker.

The Nubia Watch’s flexible display features a resolution of 960 x 192 pixels and it’s fixed to a stainless steel body that attaches to a silicone wristband. You can also pay $39 extra for a leather band.

The Nubia Watch features a 425 Wh battery that should last for up to 7 days on a charge, and you can pair the watch with iOS or Android phones via Bluetooth 4.1 using a mobile app that allows you to:

The Nubia Watch has an accelerometer and gyroscope for detecting movement, a heart rate sensor, and a pressure sensor. It has fitness tracking features including a pedometer, sleep tracker, and support for sports modes including running and walking.

For the most part, it seems like the Nubia Watch can do many of the things you’d expect from a smartwatch or activity tracker. But it runs a custom operating system rather than Google’s Wear OS, and as far as I can tell there’s no support for running third-party apps on the watch.

Also… no matter how many times the company tries to tell us that the watch is comfortable and attractive in the promotional video, I remain convinced that both of those claims are highly debatable.