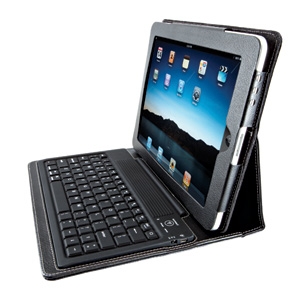 Finally, a bit of sanity. Headline after headline this year has claimed that the Apple iPad is eating into netbook and notebook sales because iPad sales are up while netbook sales growth is slowing. You could also make the case that ice cream is eating into netbook sales, because as the summer dragged on, ice cream sales rose while notebook sales growth chilled, but I don’t remember reading that headline anywhere. Thing is, just because two things are true doesn’t happen to mean they’re related — you need stronger evidence to back up correlation and/or causation.

Now researchers at NPD have put out a study that actually attempts to find out what kind of niche the iPad is filling for the people who are buying them. And you know what? Only 13 percent of iPad users say they bought the Apple tablet instead of buying a PC. Nearly twice that number said they decided to pick one up instead of a dedicated eBook reader though. So if you’re going to make a claim, it might be more fair to say that the iPad is killing the Kindle and other eBook readers… except it’s not. Th ey’re still selling pretty well too.

The study also showed that iPad owners are more likely to own Apple products than the general public, which is hardly surprising. Researchers also found that the most popular iPad activities include web surfing, reading and replying to email, and playing games. While you could make the case that these are exactly the activities people use netbooks for, a Windows or Linux powered netbook also makes it easier to edit documents and perform other activities that are easiest with a physical keyboard, so I don’t think PC makers have too much to worry about — especially since the numbers seem to show that iPads are not responsible for any significant change in the netbook and notebook space right now.

Oh yeah, and while netbook sales growth may have slowed, netbook and notebook shipment numbers are still going up for the most part.

7 replies on “NPD: The iPad isn’t killing the laptop”