Netflix lets you stream movies and TV shows on Windows and Mac computers, Chrome OS, Android and iOS devices, and a number of set-top-boxes. But up until now there’s been no way to use Netflix video streaming on a Linux computer.

That’s because the desktop web browser version of Netflix relies on Microsoft Silverlight technology for streaming videos, and up until recently nobody could get Silverlight to play nicely with Linux. 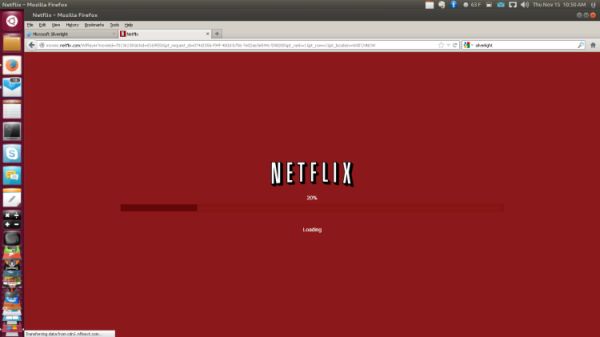 Developer Erich Hoover has figured out how to get Silverlight 4 to work with the Firefox web browser in Ubuntu Linux by using Wine.

WINE technically stands for “Wine Is Not an Emulator,” but it’s basically a Linux app that makes it possible to run some Windows software in a Linux-based operating system.

At this point the install process is a little complicated. You have to patch and compile Wine and then install Firefox and Silverlight. You can find detailed command line instructions at iheartubuntu.

Update: There’s now an easier method for installing Netflix as if it were a standalone Ubuntu app.

If you’re patient (and if you’ve been waiting for years for a way to get Netflix and Linux to play nicely, I’m guessing you are), there should also be a simpler method soon, which will let you install Netflix as an app the same way you’d install any other software on an Ubuntu computer.

While the tools are currently designed for Ubuntu, this method for getting Netflix to run on a Linux computer should lay the groundwork for bringing Netflix to other Linux distributions as well.

8 replies on “Now you can watch Netflix videos on Ubuntu”