Gaming on Chromebooks is now a thing. You’ve been able to play Android games on Chromebooks ever since Google added support for Android apps. And the rise of game streaming services like Stadia and NVIDIA’s GeForce Now means that you can stream games over the internet to just about any device with a web browser, including Chromebooks.

But now you can also install the Steam game client on some Chromebooks to run PC games, no internet connection or Android apps required. 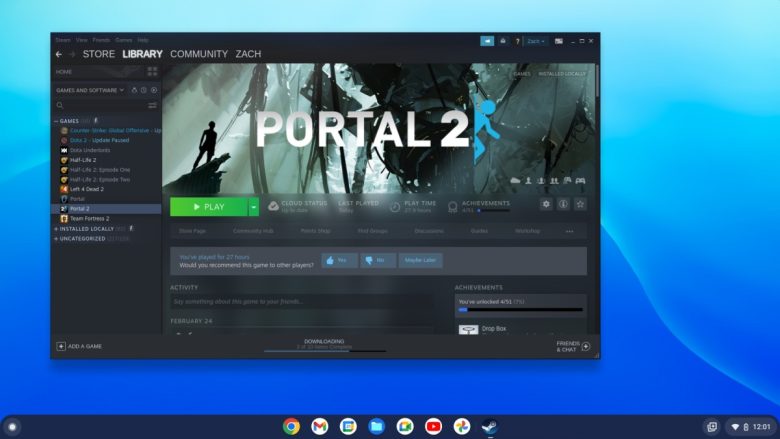 Last week Google accidentally announced the launch of Steam on Chrome OS Alpha a little before it was actually ready to go. But now the Alpha is officially available to folks running the latest Chrome OS Dev Channel builds

It’s only available for a handful of Chromebooks that meet the minimum specifications though, which include an 11th-gen Intel Core i5 or better processor with Iris Xe graphics and at least 8GB of RAM. Right now these are the only models supported:

In other words, you’ll need a fairly recent, fairly high-end Chromebook. Don’t expect to play Steam games on an entry-level model that sells for under $100 anytime soon.

Note that some of these Chromebooks are available with Core i3 processors and/or 4GB of RAM. But since those don’t meet the minimum requirements, Steam is not supported on those models.

Steam also isn’t enabled by default, but if you have a supported device then you can visit the Steam on Chrome OS website for instructions on setting up Steam on a Chromebook.

Part of the reason it’s possible to use Steam on a Chromebook is that Valve has been offering versions of Steam for Linux for almost a decade, and not only does Chrome OS have a Linux kernel, but for the past few years you’ve been able to run native Linux apps on Chromebooks as well using Google’s Crostini software.

Valve also kicked its Linux support into high gear ahead of the recent launch of the Linux-powered Steam Deck handheld gaming PC. Not only can you run native Linux games on the Steam Deck, Linux PCs, or Chromebooks with Steam, but you can also run many Windows games thanks to Valve’s Proton compatibility software.

That said, not all Steam games will work on Linux (or Chromebooks). Google notes that games using Easy Anti-Cheat and BattleEye software won’t work with Chrome OS yet. Proton-enabled games that use DirectX12 won’t start. Some games offer poor performance during the first few minutes of play.

And that’s just the tip of the iceberg when it comes to known issues with Steam for Chrome OS. This is still very much alpha-quality software, and Google notes that external monitors aren’t supported, built-in displays with resolutions higher than 1080p may have trouble displaying games, some games require at least 16GB of RAM or an Intel Core i7 processor, audio quality of Steam voice chat isn’t very good, and so on.

But the purpose of releasing alpha software is to encourage people to use it and help report bugs that developers can use to improve the experience. Google doesn’t have an ETA on when Steam for Chrome OS will graduate to beta or stable status, but odds are that the more people use the feature to play games on Chromebooks, the more resources Google will throw into making it run well.