But the new model is a pretty modest upgrade over the 7th-gen Fire HD 8 tablet which shipped in 2017. The new version has a slightly better front camera, support for larger microSD cards, and hands-free Alexa support. The display, processor, and RAM haven’t been changed at all — so if you have a 2017 model there’s probably not much reason to upgrade.

And now there may also be one less reason to upgrade: it’s finally possible to root the 2017 Amazon Fire HD 8 tablet. At the moment it takes a lot of work though. 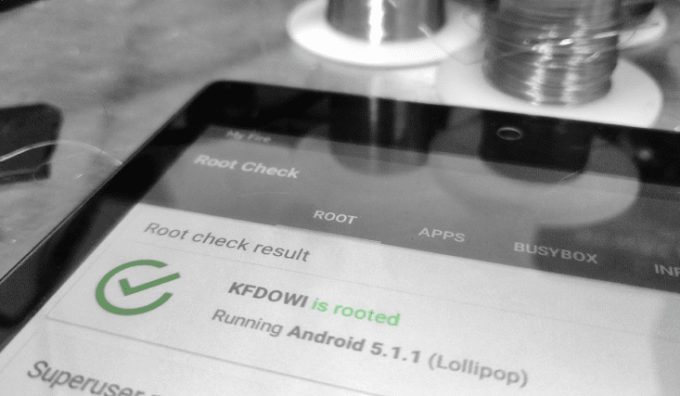 Hackers have been trying to figure out how to root the 7th-gen Fire HD 8 pretty much since it was first released. But while it’s pretty easy to install the Google Play Store and perform some other tweaks, root access has remained elusive.

Now an xda-developers forum member who goes by <br /> has posted instructions for modifying the hardware and software on the tablet in order to gain access to files and settings that wouldn’t otherwise be available.

After everything is finished, you can use the soldering iron to remove the microSD adapter, reassemble the tablet, and hope that Amazon doesn’t push out a software update that removes your root access.

That’s the short version. The actual steps involved require very specific hardware, some precise soldering work, and the understanding that there’s a decent chance you’ll break your tablet or wipe the software that’s running on it if you do something wrong.

The good news is that now that the Fire HD 8 has been rooted, it should be easier for independent developers to explore the hidden partitions, folders, and files on the device and look for ways to root the tablet that don’t involve a soldering iron and a prying tool.

Or you could just buy a different tablet that does what you want out of the box. But I still think the Amazon Fire HD 8 is one of the best tablets you can buy for under $100. It’s an even better deal when you can find one on sale — right now Amazon is selling refurbished models for $65 and up.