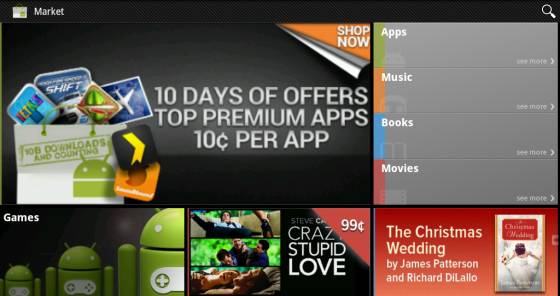 The PlayBook runs software based on QNX and can run native apps as well as Adobe AIR apps. But BlackBerry Tablet OS 2.0 also includes an Android App Player which allows the tablet to run some apps designed for Android 2.3 and earlier.

There’s a public beta version of BlackBerry Tablet OS 2.0, but if you want to install Android apps on an unrooted PlayBook you either need to modify them to run properly or download prebuilt apps. Eventually RIM plans to add Android apps to the BlackBerry App World.

But if you’ve used DingleBerry to root a tablet running OS 2.0 beta, you can install the Android Market and access hundreds of thousands of apps easily.

When all is said and done you’ll have a tablet that can run Android or BlackBerry apps without actually running Android. You can install an Android app launcher if you like though. That will make your PlayBook look like an Android tablet.

The BlackBerry PlayBook is a tablet with a 7 inch, 1024 x 600 pixel display, 1 GB of RAM, and a 1 GHz TI OMAP4 dual core processor. It looks nearly identical to an Amazon Kindle Fire, which makes sense since it’s manufactured by the same Taiwanese equipment maker.

But the PlayBook has more RAM, more memory, more buttons, and more ports than Amazon’s tablet. The only thing it didn’t have more of (until now) was apps.

RIM is currently offering the BlackBerry PlayBook for prices as low as $199, although that price is expected to rise eventually.

You can find tools for rooting the PlayBook at the Dingleberry website. Developer @neuralic has posted instructions for installing the Android Market.