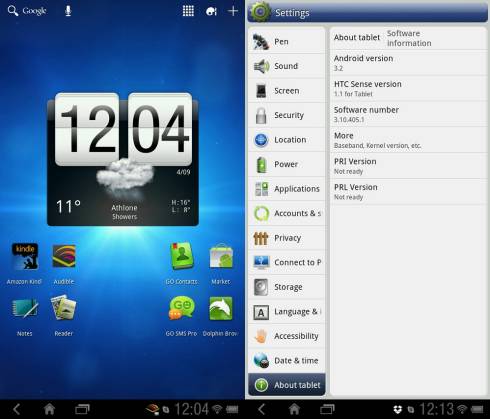 HTC hasn’t officially released a software update for the HTC Flyer 7 inch tablet that will let you run Google Android 3.2 Honeycomb yet. But a few days ago Paul O’Brien posted a leaked Honeycomb ROM designed to run on the tablet. It took a few days, but xda-developers forum member Globatron managed to get the software up and running on his tablet, and he’s posted instructions.

The good news is that this is a leaked developer build, so it’s already rooted. As you’d expect it includes the Honeycomb toolbar at the bottom of the screen and supports apps designed to run on Android 3.0 Honeycomb and up.

HTC has also added new home screen widgets and changed the behavior of the digital pen. Previously you could only use it to write or draw in certain apps, but with Honeycomb you can also use the pen like a fingertip. You can tap buttons, swipe the screen, or even type on the on-screen keyboard using the digital pen.

The bad news is that the toolbar takes up more space than the Android 2.3 Gingerbread toolbar, which means there’s a bit less space for your apps, web browsing, and other activities on the 7 inch, 1024 x 600 pixel tablet. Most of the buttons built into the screen bezel are also disabled once you update. Only the digital pen button continues to serve a purpose.

The worse news is that there’s currently no way to uninstall the ROM once you flash it, and you will void your warranty if you try to install the software. If you do something wrong, you could also leave your HTC Flyer tablet in an unbootable state.

Paul O’Brien plans to spend some time working on the software to make it easier to install, more stable, and easier to replace with alternate software. In other words, while you can install Honeycomb today, it’s probably a good idea to wait a little longer until there’s a safer method.

The current method also only supports the HTC Flyer with 3G and 32GB of storage.