At least that’s true if you want to install an official version of Android 6.0 distributed by Google. Want to install a custom ROM on your Nexus 4? Now you can do that.

Developer Dmitry Grinberg has released the first unofficial port of Android 6.0 for the Nexus 4. 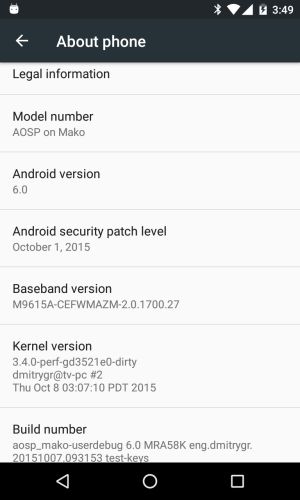 Grinberg says the operating system is based on Android Open Source Project code for the 2013 Google Nexus 7, since that tablet has a processor that’s similar to the one used in the Nexus 4 smartphone (which was released on 2012).

Despite the hardware similarities, Google decided to release a version of Android 6.0 for the tablet, but not for the phone… but Grinberg was able to use Google’s Nexus 7 code as a starting point and then make changes to SELinux policies and Init scripts to get the software working on the phone.

It probably doesn’t make sense to run out and buy a Nexus 4 just because it can now run the latest version of Android. The has a 4.7 inch, 1280 x 768 pixel display, Snapdragon S4 Pro processor, and up to 16GB of storage. That hardware’s not bad, but it may feel a bit dated in 2015.

But if you’ve been hanging onto one for a few years, it’s nice to know that you can keep the software up to date.

Just note that you’ll no longer receive security updates from Google if you install Android 6.0 since you’ll basically be replacing Google’s firmware with a custom ROM. That means you’ll need to manually flash any updates as they become available. I suspect you’ll be able to find download links and updates at the Nexus 4 pages the xda-developers forum as they become available.