Chip maker NXP is finally rolling out the successor to the i.MX6 line of chips that were first introduced way back in 2011 (by Freescale, which was later acquired by NXP).

The new i.MX8 line of processors are 64-bit, ARM-based chips with support for 4K and they’re expected to come in a few different configurations, although the frist to launch is the i.MX8M ARM Cortex-A53 processor.

We started to see companies announce devices that use that chip in late 2017. Now some of the first are available for purchase.

For instance, there’s the SolidRun i.MX8 SOM, which is a system-on a module with a starting price of $80 for a model with a dual-core processor and 1GB of RAM. You can also pay more for versions with up to a quad-core i.MX8 chip, up to 2GB of RAM, and up to 8GB of storage.

The module lacks full-sized USB, Ethernet, and HDMI ports, but you can get those features by picking up a HummingBoard Pulse instead. This is basically what you’d get if you added the SOM to a carrier board with additional I/O ports. Prices range from $160 for an entry-level model to $240 for one with all the bells and whistles.

And then there’s the CuBox Pulse, which is less of a developer-centric device and more of a standalone mini PC.

It’s a tiny cube-shaped computer with an NXP i.MX8M processor, 1GB of RAM, 8GB of storage, and support for Android and Linux. It sells for $180 (or $170 if you don’t need a power adapter), but there’s an estimated 12-week wait for shipping. 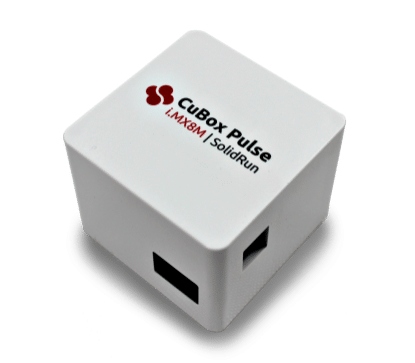 The entry-level model has 1GB o RAM and 4GB of storage, while there are higher-priced models with up to 2GB of RAM, 16GB of storage, and 802.11ac WiFi and Bluetooth 4.2.

The WandPi 8M is expected to ship this spring.

NXP also has information about 5 other systems-on-a-module that are powered by its new i.MX8 chips. Most are aimed at Internet of Things applications such as multimedia players or digital signage.

But Linux laptop builder Purism is also considering using an i.MX8 processor in its upcoming Purism Librem 5 smartphone. The i.MX series of chips might not be as powerful as the latest Qualcomm or Samsung processors, but they’ve long been popular with the free and open source software community due to the relatively ample amount of documentation available for the processors.

via SolidRun (press release) and CNX-Software

12 replies on “Now you can buy mini PCs with NXP i.MX8 chips”