A week after Barnes & Noble released a new version of the NOOK Tablet, hackers have figured out how to get it to boot from a microSD card. This allows you to circumvent the locked bootloader and load custom firmware on the tablet including ClockworkMod Recovery or custom ROMs such as CyanogenMod 7. 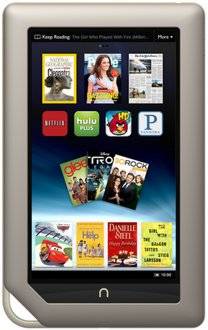 Because of the minor differences, if you use the same tools to root the 8GB NOOK Tablet or install custom firmware as you would use for the 16GB model, you may run into problems or even temporarily “brick” your tablet, which is the technical term for making it appear to be unbootable.

The process for booting the 8GB NOOK Tablet from an SD card still isn’t all that user friendly, but I suspect it won’t take long for someone to put together an easy-to-use tool that allows 8GB NOOK Tablet owners to load software from a removable storage card.

If you’ve accidentally bricked your tablet by trying to use the wrong tools, you might be able to find some assistance in a few threads at the xda-developers forum: