It’s been a busy week for developers working with Google’s Android 4.4 KitKat software. Two of the most popular custom ROM builders have released their first public builds based on KitKat, and two Chinese chip makers have also released builds of Android 4.4 which support devices with their processors.

Here’s a quick roundup of things that now run Android 4.4. 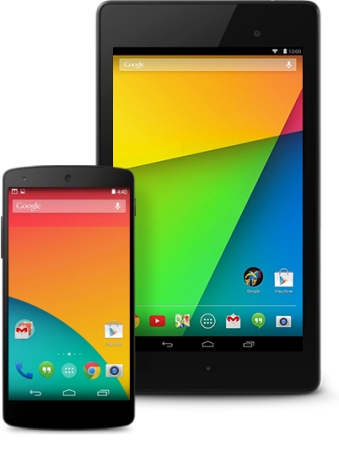 AOKP and Paranoid Android are two custom operating systems based on Android Open Source Project code. They’re each known for adding new capabilities to Google’s software and giving users far more control over the look and feel of their devices through advanced settings options.

You’ll need to unlock the bootloader on your device in order to install an AOKP or Paranoid Android custom ROM, but once you’ve done that you can backup your device or restore from that backup.

Anyway, each team released their first builds based on Android 4.4 recently. Paranoid Android’s beta release is available for most recent Nexus phones and tablets, and it’s basically AOSP code with a few minor tweaks. Some of PA’s hallmark features such as the HALO messaging/multitasking system, PIE controls, or Hybrid system for adjusting DPI settings on a per-app basis are not yet available.

Meanwhile the AOKP team has started releasing Android 4.4 KitKat nightlies for a handful of devices including Nexus phones and tablets, the Samsung Galaxy S3 and S4, HTC One, and the latest Sony Xperia models, among others. Like Paranoid Android, AOKP releases from late December, 2013 are still a bit rough around the edges and don’t have all the features you might expect from an AOKP ROM… but that should change as development continues.

It’s not just custom ROM makers who are releasing software based on KitKat. Chinese chip makers Allwinner and Rockchip also have a habit of releasing builds of Google’s software optimized for their processors.

Allwinner recently released an updated software developer kit for its A31 and A31S quad-core processors based on Android 4.4, and Geekbuying reports that there’s new firmware that runs on Android TV boxes with Rockchip RK3188 processors, including the Tronsmart MK908 II and CXD-919, although it should work on most devices with the same processors and the AP6210 WiFi module.

OK, so there are a growing number of ways to get Android 4.4 on your device. Why do you care?

For the most part, KitKat looks a lot like the Jelly Bean and Ice Cream Sandwich builds of Android that came before. But Google has been tweaking the user interface to create a more uniform experience across devices. And that’s just the tip of the iceberg.

The operating system has also been slimmed down to offer better performance on devices with as little as 512MB of RAM — something that could come in handy if you’re picking up a cheap tablet with one of those Chinese processors.