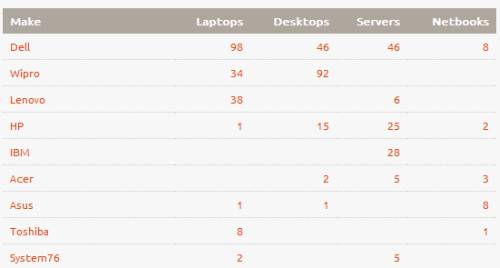 Trying to figure out whether your computer supports a specific Linux-based operating system can be something of a crap-shoot. While most PCs that ship with Windows feature a sticker on the box that says they’re certified to run the operating system, you often won’t know if your computer has a funky wireless card or unsupported graphics driver until you try to load Ubuntu, Fedora, OpenSUSE or another Linux distro and find out that it just doesn’t work.

Now Canonical is making things a lot easier for anyone looking for a PC that supports Ubuntu Linux. The company has started a certification program with top computer makers including Acer, Asus, Dell, Lenovo, HP, and Toshiba. You can find a complete list of certified computers at the Ubuntu website.

Not surprisingly, Linux PC builder System76 has a few computers that made the cut. But there are a whopping 98 Dell laptops on the list, as well as 46 desktop computers, 8 netbooks, and 46 servers.

Lenovo and Toshiba also have a number of Ubuntu certified devices, and there are 8 Asus netbooks on the list.

That isn’t to say that the computers on Canonical’s list are the only systems you can run Ubuntu Linux on. But if you buy one of these computers there’s a pretty good chance you won’t have to pull your hair out trying to figure out how to add WLAN support.