Google’s latest chat app rolled out for smartphone users last fall, but at the time Allo was only available in the form of a smartphone app. Now you can use Allo on the web… but you still need to install the smartphone app first.

You can get started by visiting https://allo.google.com/web in a desktop browser, and then scanning the QR code you’ll see on your computer screen with the Allo smartphone app… assuming you have the latest version of the app. Older versions don’t include a QR scanner.

Don’t feel like waiting for the over-the-air update? You can download and sideload the latest Allo app for Android from APK Mirror. 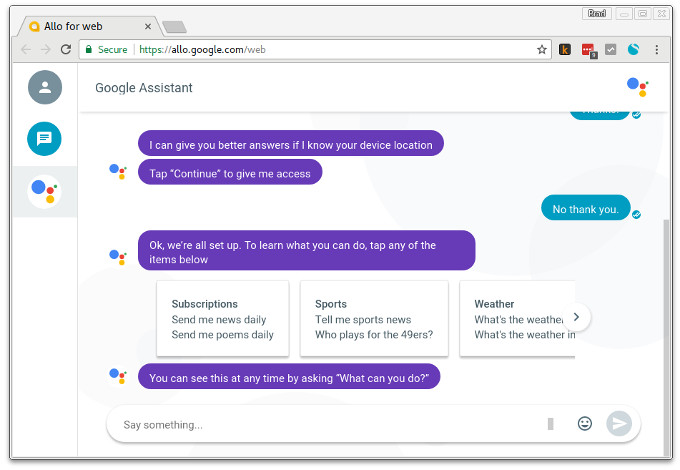 A few things to keep in mind: Allo for web only works with google’s chrome web browser and it only works if you’ve paired your account with a smartphone. At launch only Allo for Android is supported, but iOS pairing is in the works.

Some features are also still only available through the mobile app, such as backing up information, adding or removing members from an existing group, connecting, switching, or removing Google accounts, and notification and privacy settings. Some chat features such as taking a photo, blocking photos, or starting a chat with someone that’s not already in your contact list are also app-only for now.

Oh, and one more really important thing to keep in mind: Allo for web only works if you’re phone is connected to the internet. Because basically Allo for web isn’t separate from the Allo app on your phone. It’s pretty much just a remote control: You type your messages and read your responses in the Chrome web browser, but all the messages are sent via your phone. So if your phone’s battery dies or you turn it off or put it in airplane mode, you’ll see a message atop chat windows in Allo for web that say “unable to reach phone.”

If you’ve ever used WhatsApp Web, then you may already be familiar with these restrictions, since WhatsApp’s web service is also linked tightly to the company’s smartphone app.