Google recently rolled limited support for running Android apps on a Chromebook. At launch only 4 Android apps were added to the Chrome Web Store: Duolingo, Evernote, Vine, and Sight Words.

But while you’re waiting for more Android apps to hit Chrome’s app store you can actually get just about any Android app to run on a Chromebook. You’ll just need to prepare each app individually. 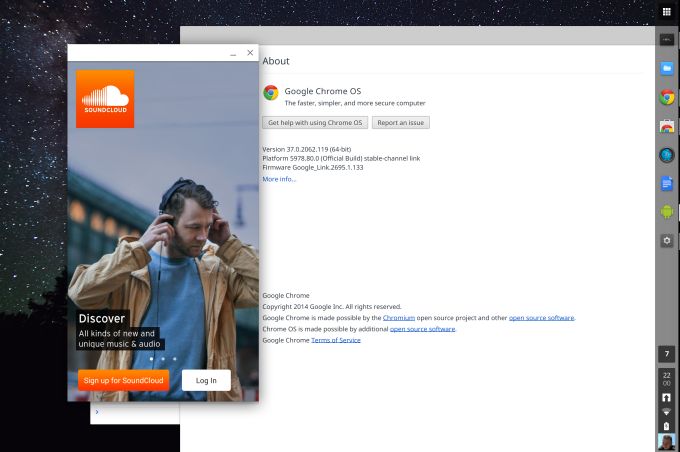 Developer vladikoff has posted code and instruction on github. In a nutshell what you need to do is:

That’s it. Not every Android app will work… and some apps that expect touchscreen displays or other hardware that may not be available on a Chromebook might not function.

But this trick allows you to run Android apps on a Chrome OS laptop. While there are web app versions of many Android apps, now you can run them in app form. That means some apps can run in smaller windows, some apps can work without an internet connection, and some apps might perform better or offer a different user interface than you’d get by simply visiting the website.

Some apps that have been confirmed to work include Pandora, Twitter, Soundcloud, and Skype — although you have to do a little extra work to make Skype work. Some other apps such as XBMC, WhatsApp, Firefox, Opera, and Spotify do not work yet.

If you want a stable, reliable experience that’s officially supported by Google you might want to wait for more Android apps to be added to the Chrome Web Store. But if you just want to try loading Android apps on your own, now there’s a way to do it.

Note that the instructions allow you to prepare either the tablet or the smartphone versions of Android apps. Using the –tablet modifier gives many apps a larger user interface, often with a multi-column layout, while the phone versions provide a smaller looking app which may come in handy for music players, chat apps, or other software that doesn’t need to run in full screen to be useful.