The first smart TVs to use Amazon’s Fire TV user interface are available for pre-order for $450 and up and should begin shipping in June. 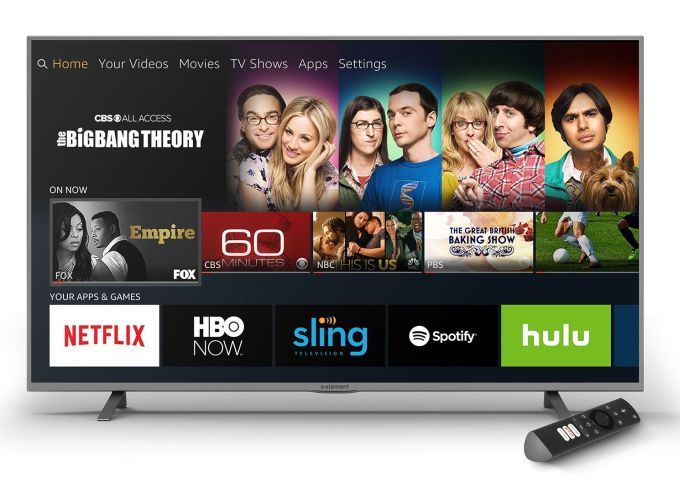 First announced at the Consumer Electronics Show in January, the new televisions have the same user interface that recently rolled out for Amazon’s Fire TV set top boxes.

While the Fire TV software is great for Amazon Prime members, since subscribers get access to a large library of movies, TV shows, and music, you don’t need to be a paying Amazon Prime member to use the software. There’s also support for third-party apps including Netflix, Hulu, HBO Now, Spotify, and Pandora, just to name a few. There’s are also a variety of apps and games that you can download from the Amazon Appstore, which arguably makes the platform a bit more Apple TV-like than Roku-like.

One thing that sets the software running on these TVs apart from what you’d get if you bought a Fire TV box is the US for watching live channels. There’s a program guide baked in, and support for pausing or rewinding live TV (this isn’t a true DVR though: you only get a 90 second buffer for pause/rewind unless you use an SD card for additional storage).

There’s also support for switching inputs so you can access your cable box, DVR, Blu-ray player, or what have you.

Eventually we’re expecting Fire TV Edition television sets from Seiki and Westinghouse, but the first to launch are coming from Element Electronics. All three of those companies have the same parent company though, a Chinese electronics company called Tongfang.

Each model has a 3840 x 2160 pixel native resolution with support for streaming 4K, 1080p, or 720p content. The televisions have WiFi and Bluetooth, 4 HDMI ports, component/composite ports, and optical SPDIF ports and they’re powered by a quad-core processor, 3GB of RAM, and 16GB of storage. There’s also a USB port and an SD card slot that you can use for additional storage.

Customers who pre-order can also opt for a free indoor antenna for watching over-the-air broadcasts.