Smartwatches tend to have pretty small screens, because it’d look silly strapping a device with a 3 inch display to your wrist. But sometimes a 1.5 inch display just isn’t good enough.

The Asu Cast 1 was first introduced in January, and now Asu is taking orders for the watch in China, where it sells for 2,980 Yuan, or just over $450. 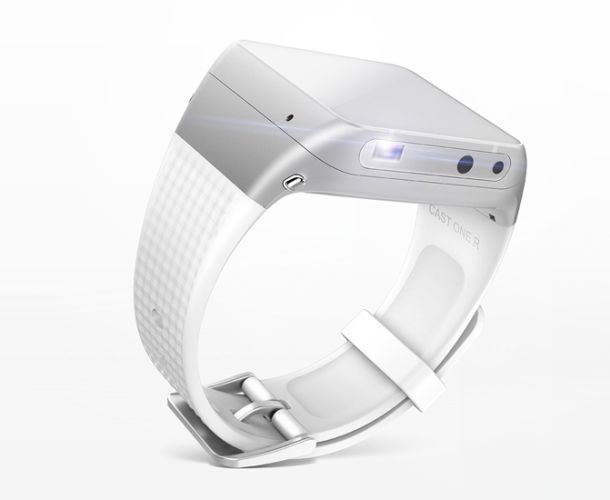 The device features a Qualcomm Snapdragon 400 processor, 768 MB of RAM, 4GB of storage, and a 740 mAh battery (which is twice the size of most smartwatch batteries… but still pretty small for a portable projector battery, so don’t expect stellar battery life unless you rarely use the projector.

It has a sapphire touch screen with support for multitouch input, WiFi and Bluetooth, and an Android 5.1-based operating system.

The laser projector has a resolution of 1024 x 600 and a brightness of 15 lumens, although Asu claims that it shines as brightly as a 100 lumen DLP projector. In addition to projecting pictures or movies on a screen, you can project onto your hand in order to view messages or notifications on a slightly larger surface.

Asu’s smartwatch measures 2″ x 1.6″ x 0.6″ and weighs 2.3 ounces, making it a little thicker and heavier than most smartwatches. But you try cramming a projector into a watch case without adding a little bulk.