The Nokia 1680 classic is a basic cellphone that was released in 2008 just as smartphones were starting to become a thing. Designed for phone calls, texting, and not much else, the phone has a small screen, a numeric keypad, and support for 2G networks.

But a hardware hacker going by Reimu NotMoe has scooped out the guts of the phone and replaced them with a custom printed circuit board (PCB) and other components to transform the Nokia 1680 classic into the Notkia: a pocket-sized Linux computer/communication device. 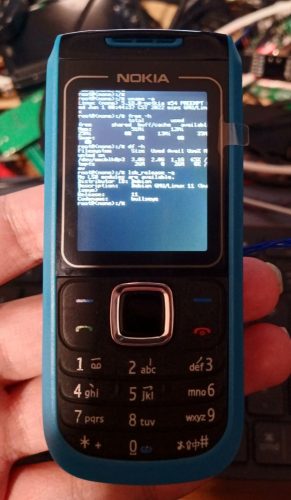 Note that this isn’t just new software for an old phone. The full project involves replacing much of the phone’s hardware, while keeping the shell, number pad, and other buttons.

The original PCB has been replaced with a new one featuring a 1 GHz Ingenic X1000E single-core MIPS processor with 64MB of RAM plus 32MB of NOR flash storage and 4GB of SLC NAND flash.

The original 128 x 160 pixel TFT screen has been replaced with a 2inch, 240 x 320 pixel IPS LCD display, although it’s actually a little too large for the device, so a few pixels get cut off by the plastic borders. So the effective/visible screen resolution is 220 x 280 pixels.

Everything works with mainline Linux software, including text input using the phone’s original T9 numeric keypad. And thanks to the upgraded wireless components, the Notkia can be used as a wireless communication device or walkie talkie. But one thing it can’t do? Make phone calls or use data over cellular networks.

There is a GNSS module for satellite location, but it hasn’t been tested yet. And since there’s no headset jack, you’ll need wireless headphones or a USB Type-C to 3.5mm audio adapter to use headphones with the Notkia.

Schematics, a component, list, and the design process are detailed at Hackster and HackADay, and Reimu NotMoe plans to open source everything in the future. There’s also a chance that you might be able to buy a Notkia or a kit to make your own in the future, as the project has been submitted to open source hardware crowdfunding service Crowd Supply for consideration.

via Hackster and CNX Software