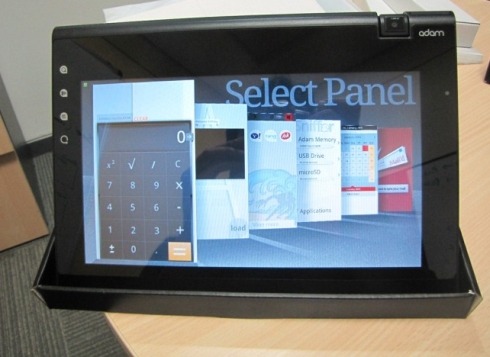 The folks at Notion Ink are now accepting the second round of orders for the company’s Adam tablet. The Android slate features an NVIDIA Tegra 2 dual core processor, a custom user interface called Eden, a handful of custom apps, and one feature you won’t find on any other commercially available tablet today: an optional Pixel Qi transflective display which is readable outdoors in direct sunlight (albeit in a high contrast, nearly black and white mode).

The tablet runs between $375 and $550 depending on the configuration. The cheapest models have standard LCD displays and WiFi connectivity, while the top of the line tablets have Pixel Qi displays, WiFi, and 3G modems. The tablets ship from China and there’s a global shipping rate of $50.

The Adam tablet is still in limited supply, and Notion Ink is sending out invitations to customers who have already signed up first. Orders will be opened to more people late this week.

Customers who picked up some of the first Adam tablets have had mixed responses. The software is reportedly a bit buggy, although Notion Ink has pushed out a software update to address some of the issues. Some users have also complained about the quality of the Pixel Qi displays, some of which appear to have blotchy areas.

Notion Ink promises to continue pushing out software updates, and while there are no plans to update the OS from Android 2.2 to Android 2.3 Gingerbread, the tablet’s firmware already includes some Gingerbread elements. Eventually the company promises to offer the Adam tablet with Google Android 3.0 Honeycomb — the first version of Android designed specifically for tablets.