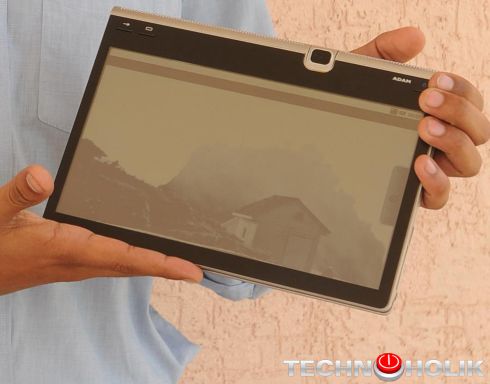 The Notion Ink Adam Tablet is one of the first devices due out with a Pixel Qi display and NVIDIA Tegra 2 chipset. If you put those things together, what you get is a heck of a lot of positive buzz for a product from a company that most people hadn’t heard about before CES. But it looks like Notion Ink is a few steps closer to bringing the Adam to market. Today the company posted the specs for the tablet on its web site, and tech blog Technoholik has snagged some hands-on photos of what looks like a production sample (as opposed to the rendered images we saw last week or the handcarved wooden prototype I saw at CES in January).

So here’s what we know about the tablet. It has a 10.1 inch, 1024 x 600 pixel matte (non-glossy) touchscreen which can function as a full color display or as a high contrast (almost black and white), low power display that’s easily readable in direct sunlight. It has a Tegra 2 chipset which combines a low power dual-core ARM A9 CPU with enough graphics power to play 1080p HD video.

The tablet has a 3 cell battery, which should run for up to 16 hours in full color mode. Technoholik claims you’ll get up to 160 hours with the backlight off, but I’m pretty certain that’s not true, since the folks at Pixel Qi tell me you should generally expect to save just a few watts of power by shutting off the backlight. They’re also working on software that will afford greater power savings by allowing the CPU to shut down when the screen is inactive – for instance, when you’re reading an eBook and only need the CPU to power up to flip pages. But I don’t think that technology is available yet.

The Adam tablet supports 802.11b/g WiFi, Bluetooth, 2.1 and 3G wireless. And it has a 3.2MP camera that you can rotate so it faces the front or back of the tablet, allowing you to snap pictures or use the tablet as a webcam.

There are 3 USB ports, an HDMI output, A-GPS, and an accelerometer. It will weigh about 1.4 pounds and measure just about half an inch thick.

What we still don’t know is the final price or when the Adam Tablet will be available.

Update: SlashGear has more photos, plus a demonstration of the Adam running Adobe Flash, something that rival tablet the iPad can’t do. What’s interesting is that the Adam uses the Google Android operating system, which doesn’t officially support Flash yet either. So either that’s about to change this week at Mobile World Congress, or Notion Ink has some pretty neat tricks up their sleeves.