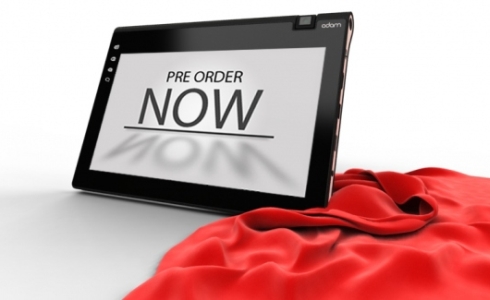 Good news for anyone who has been waiting to pre-order the Notion Ink Adam tablet running Google Android. Pre-orders begin this afternoon. Oh yeah, and the tablet will be a bit cheaper than expected, starting at just $375.33.

Notion Ink says the tablet will carry the same prices in each country where it is available — something that’s rather unusual in the consumer electronics space. The company is based in India, but the Adam is expected to be available internationally.

Notion Ink is giving first dibs on pre-orders to folks who have already left comments on the company’s blog. At 1:30PM Eastern time, those people will start receiving links to the order page via email. At 7:30PM ET tonight, pre-orders will open to the general public.

In other news, despite rumors that the tablet would have an NFC (Near-field communication) sensor, it apparently does not. According to today’s blog post though, the tablet does have one nifty special feature we hadn’t heard about before: You’ll be able to use it as a wireless touchpad for a computer, allowing you to draw, paint, or just control your PC from your tablet.

More details are available at the Notion Ink blog, including new screenshots of the music player, eBook app, email app, keyboard, and more.

Update: The launch event has caused a bit of controversy, which is giving some potential customers reason for pause.