A few years ago a company called Noteslate promised to deliver a $99 tablet designed for writing handwritten notes. They didn’t.

But now the company is back with a new model featuring a new design, technology that actually exists, and a shot of really launching this fall for $199. 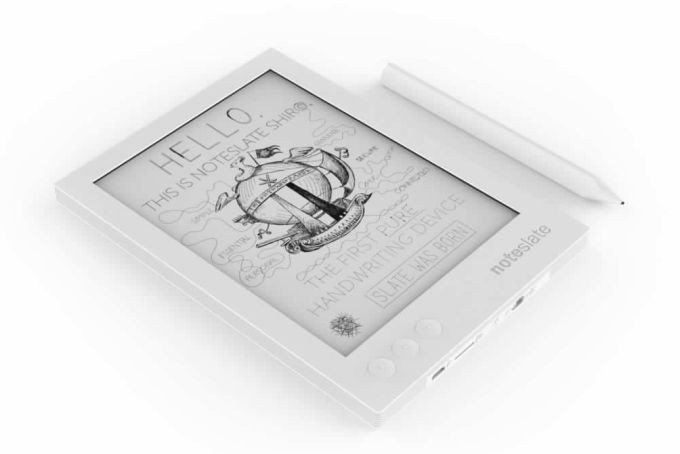 It’s called the Noteslate Shiro, and it’s available for pre-order now, but it’s not expected to ship until September or later. Noteslate says it won’t charge you for a pre-order until the tablet actually ships.

The new model features a 6.8 inch, 1080 x 1440 pixel E Ink Pearl display with support for 16 shades of grey and a backlight. There’s 8GB of storage, a microSD card slot, and a custom operating system called Noteslate OS that lets you use the device as an eReader and a note-taking tablet.

It works with a pressure-sensitive pen, allowing you to draw pictures or compose handwritten notes. There’s also support for finger input for navigating the user interface without the use of a pen.

You could always use a smartphone or color tablet to scribble notes, but a device like the Noteslate Shiro should get significantly longer battery life thanks to its low-power display and low-power 1 GHz Freescale processor. It’ll also be easier to use in direct sunlight, and at $199, it’s a relatively affordable (if less versatile) options when compared with, say, an iPad mini.

Clearly this isn’t the sort of product that’s going to appeal to everybody… but those looking for a dedicated note-taking device might find the Shiro attractive.

Noteslate says it hasn’t given up on the original device it described in 2011… but that it’s still under development. The 6.8 inch Noteslate Shiro will be the company’s first product, followed by a 13.1 inch device.

E Ink already offers screens in those sizes, and companies like Netronix have already shown devices with E Ink screens and support for pen input, which makes the Noteslate Shiro look much more plausible than the company’s original concept.

via Ink, Bits, and Pixels