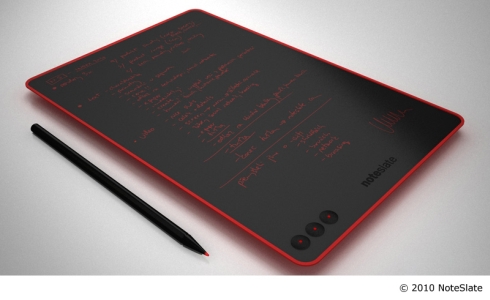 Like the idea of a cheap grayscale tablet with excellent battery life, but not thrilled about the black-on-white text? NoteSlate has an unusual solution. the company is developing a line of $99 slates which come in a variety of two-tone designs. You’ll be able to get a standard white background with a black black text, 4 different models with black backgrounds and blue, white, green, or red text and pictures.

The company also plans to offer a 4 color version which will show blue, red, green, or white text and drawings on a black background, but that model will likely cost more.

The NoteSlate is designed as a digital note-taking device with a sort of electronic paper display. You can take notes with a stylus and press buttons to save, delete, or view previous screens. The tablet will have a 13 inch, 750 x 1080 pixel display and weigh about half a pound. the company syas you should be able to get up to 180 hours of battery life.

At launch, the NoteSlate software will have a limited feature set, allowing you to make drawings and listen to MP3s using headphones (there’s no speaker). Future updates will bring support for reading PDF files and OCR text recognition for converting written notes to plain text.

The NoteSlate web site has a few inconsistencies. At one point, the device is described as weighing 240 grams, while another section says it weighs 280 grams. There’s also an exclamation point net to “no web browsing” which may be something the developers are really excited about, or just something they want to make sure you’re aware of.

The overall concept is pretty interesting, but the company says the device won’t actually be available until June, so it’s going to be a little while before we can see whether the NoteSlate can deliver on its promise.

July 13, 2011 Update: It turns out the NoteSlate was little more than a concept when the company introduced in January. The folks behind the concept are working to turn it into reality, but that June deadline has come and gone and there’s still no product. In the meantime, there’s a company offering a similar device called a Boogie Board which shows some promise.

6 replies on “NoteSlate: $99 touch tablet with a two-color display”