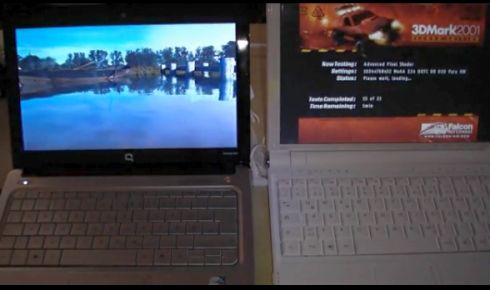 The HP/Compaq Mini 311 and Lenovo IdeaPad S12 are two of the first laptops available with NVIDIA’s ION chipset which combines and Intel Atom CPU with an NVIDIA GeForce 9400M graphics processor. And Johannes at NewGadgets.de happens to have one of each right now, so did the sensible thing and pitted the two machines against one another in a battle to the death. Or at least a battle to see which machine performed better on the 3DMark 2001 graphics benchmark.

You can see the results in the video below. You don’t have to speak German to get the gist, but here’s the short version: Both machines perform pretty well when it comes to displaying 3D graphics. But as the video goes on, you can see that the Lenovo IdeaPad S12 is lagging a bit behind the Compaq Mini 311. At the end, you can see that the HP laptop finishes the test first and gets a total score of 7121 while the Lenovo machine scored 6030.

You can check out the video for the blow by blow action after the break.

Update: As has been pointed out in the comments, the Compaq Mini 311 in this test is running Windows XP, while the Lenovo IdeaPad S12 is running Windows 7, which could explain some of the disparity. It’s also possible that differences in hard drives, RAM, or other hardware could play a factor. It’s not a perfect test, but it’s probably the same one I would have run, since these are the two machines that happen to be available at the moment (although the HP Mini 311 is now available with Windows 7, in the US at least).