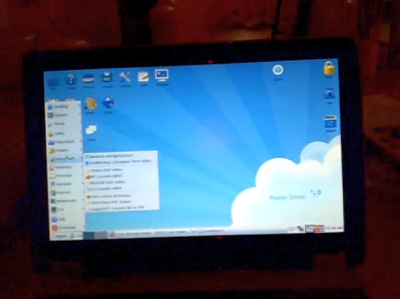 The NorhTec Gecko Edubook that I’m testing this week shipped with WattOS, a light weight Linux distribution optimized to support the netbook’s somewhat unusual hardware. But drivers are also available for Windows XP,and you can configure several other Linux0based operating systems to play well with the Edubook, including Ubuntu, Debian, Zen, and Puppy Linux.

Although I haven’t had a chance to test Puppy yet, NorhTec’s Michael Barnes has. And he’s posted a video showing Puppy Linux 4.12 running on the Edubook from a USB flash drive.

The OS runs quite smoothly on the low power netbook, which makes sense since it’s designed to run on older systems with slow processors. The entire operating system actually loads itself into RAM and runs without affecting your hard drive at all.

As Barnes points out, the netbook can handle internet audio and video streaming under Puppy, although the video playback is a bit choppy.