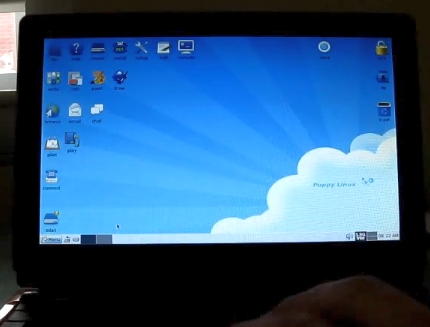 The NorhTec Gecko Edubook is one of the most innovative netbooks around when it comes to hardware design. It runs on rechargeable AA batteries, making it easy to find replacements pretty much anywhere in the world. The OS and all the data is stored on an SD card, making it easy to upgrade. And the CPU and RAM are on a single chip which you can pop out and replace just as easily as changing a stick of RAM in most notebooks.

But there’s a down side. The 1GHz XCore86 CPU is pretty slow. And you take a performance hit when you run a relatively heavy operating system such as Windows XP or Ubuntu from an SD card. And that’s why I noted recently that Windows XP and WattOS Linux both felt pretty darn sluggish on this system. Sure, it’s not supposed to be good enough for watching Flash video from YouTube. But it also took an unreasonably long time to load the OS, launch programs, or even open web pages.

While these things might not be as important if you’re looking for a sub-$200 laptop to deploy across schools in developing nations, they definitely make the Edubook feel a lot slower than most other netbooks on the market.

Taking a suggestion from the folks at NorhTec, today I tried tweaking Windows XP a bit by disabling system restore, and indexing features, and adjusting the theme and a few other elements to improve performance. Overall, this helped a bit. For instance, programs launched a little faster, and I could get some videos to play, although the audio and video were out of sync.

But overall Windows XP was still pretty annoying to use. Fortunately, I picked up an 8GB SD card with a version of Puppy Linux optimized for the Edubook at CES. I popped off the netbook cover, slid out the old SD card and replaced it with the new one, and less than a minute later Puppy was up and running. And it felt like a whole new computer!

Puppy is an extraordinarily light weight Linux distribution that can be installed to a USB flash drive and run as a portable operating system that you can carry with you from PC to PC. It’s even faster when you install it to your computer’s main storage. Here’s a video showing how well Puppy runs on the Edubook. The video starts out with the installation process, although it’s worth noting that you could also install Puppy using a USB flash drive if you don’t have a custom SD card from NorhTec (although you may then have to tweak the OS to support the Edubook’s hardware.

The OS loads in under 60 seconds. And while Windows XP sort of, kind of does the same, the difference is that Puppy is immediately usable from the second the desktop appears. Windows tends to be even more sluggish than usual for the first couple of minutes until all the processes have loaded properly.

Puppy comes preloaded with a number of applications including a network manager for getting online, the Seamonkey internet suite, which is based on Mozilla and functions pretty much like Firefox in most respects, and AbiWord and Gnumeric for editing documents and spreadsheets.

Not everything was perfect in Puppy. Video playback was choppy at best, and Flash video is pretty much out of the question. But web pages loaded more quickly, and for the first time I could imagine using the Edubook as a portable machine for web browsing.

Clearly, Puppy Linux isn’t the only light weight Linux distribution around. I imagine Damn Small Linux, for instance, would also run well. For the sake of comparison, here’s another video showing the same hardware with Windows XP, which is slow even after I tweaked the OS settings.