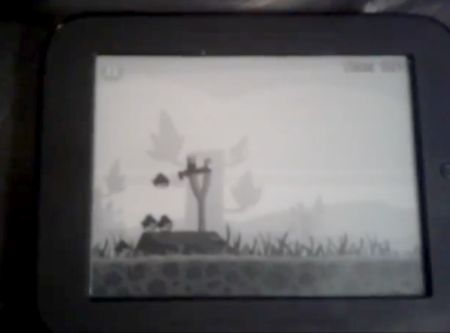 The new NOOK touchscreen eBook reader has a 6 inch E Ink display and a battery that can run for months at a time. But there’s one other really cool think about the $139 NOOK Touch: It runs Android 2.1.

Just days after the eReader started shipping, YouTube user JFreke rooted the device and started installing third party apps. It turns out that Angry Birds is barely playable. That’s not surprising, since the E Ink display has a fairly slow screen refresh rate (at least by LCD or OLED standards). But you can play the game, which is pretty impressive.

This opens the door to using the NOOK Touch to surf the web over WiFi or run other apps that don’t need to run at 30 frames per second. But the main reason I think this is big news? You should be able to run third party eBook apps on a rooted NOOK Touch.

In other words, you’re not locked into the Barnes & Noble eBook store with this device. You can install the Amazon Kindle app for Android, the Kobo app, or a standalone eReader such as Aldiko.

You can check out the awkward Angry Birds video after the break.