E Ink is a pretty fascinating display technology. Designed for eBook readers, E Ink screens look a lot like ink on paper. But there’s a down side – most eReaders have slow screen refresh rates which means you can’t use them for video or even smooth scrolling in web browser or other applications. 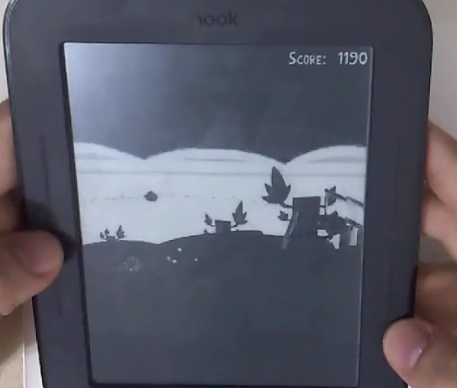 That’s not usually a problem, because most E Ink devices are meant for reading books and not much more. If you’re staring at one page of text at a time, the fact that it takes a fraction of a second to load the next page doesn’t present much of a problem.

But what if you have an eReader like the Barnes & Noble NOOK Simple Touch which is based on Google Android… and you want to use it like an Android tablet?

It turns out there’s hack for that.

Xda-developers forum member marspeople has put together a utility that you can install on a rooted NOOK Touch to speed up screen responsiveness dramatically.

The downside is that you lose the ability to see grayscale imagery. Instead, the eReader will only display black or white. In the demo video you can see how much faster things get when the color depth is reduced to 1-bit.

At the end of the video it looks like Angry Birds is actually playable with 1-bit color depth, while it’s nearly unusable in grayscale. Unfortunately it’s tough to tell one bird from another when they’re all black.

The ability to speed up screen refresh rates is actually built into the device, but marspeople’s app will help you enable or disable the feature. He’s also made the source code available for anyone looking to port the software to run on different devices.

But here’s the thing — while this makes a nifty party trick, even with a fast refresh rate, E Ink isn’t nearly as responsive as a typical LCD display. Video will look choppy, scrolling is still jerky, and that’s before we get into the fact that you’re losing color depth on a device that didn’t have much to begin with.

If you really need full-motion graphics on an eReader, you’re probably better off getting a color eReader than a NOOK Simple Touch or similar device. But an E Ink device like the NOOK will still use much less battery life and run for longer on a charge than the NOOK Color or NOOK Tablet.

One reply on “NOOK Touch hack speeds up E Ink, shows why it’s not ready for tablets”