NOOK Tablet hackers have added a few new tools to their arsenal this weekend. Developer Cobroto has put together one of the first custom ROMs for the tablet, while developer AdamOutler has put together a rather impressive tool based on Ubuntu Linux which you can use to reformat the NOOK Tablet and roll back from OS 1.4.1 or later to NOOK Tablet OS 1.4.0. 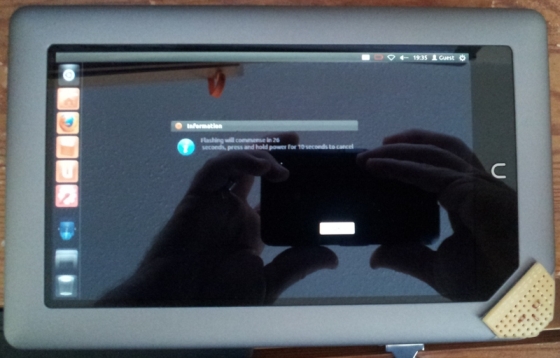 Now that hackers have figured out how to make the NOOK Tablet boot from an SD card, we’ve seen some pretty nifty tools. You can root the tablet with an SD card or install ClockworkMod Recovery (although there’s an even easier way to install CWM without a bootable SD card at all).

But AdamOutler is trying to go even further and convince the NOOK Tablet to run Ubuntu 11.10 Linux as an alternative to the B&N version of Google Android. He’s had limited success since so far the newest Linux kernel he’s been able to boot is 2.6 and it will take a 3.0 or later kernel to add full touchscreen support.

What AdamOutler has managed to do though, is create a bootable SD card that loads Ubuntu onto the tablet and then runs a series of operations to completely wipe nearly every disk partition on the tablet and re-flash the tablet with the NOOK Tablet OS 1.4.0 software.

In other words, once you create a bootable SD card using AdamOutler’s tools, you can perform a complete factory restore. This could come in handy if you want to return or sell a NOOK Tablet. But since it rolls you back to OS 1.4.0 rather than the newer 1.4.1 software it will also make installing third party apps, rooting the tablet, and making other changes much easier.

If you install ClockworkMod Recovery on a NOOK Tablet you can use it to create a complete backup of your device or restore from a previous backup. But you can also use it to flash (install) new software on the NOOK Tablet.

Eventually we may see CyanogenMod or other custom versions of Android ported to the NOOK tablet and you’ll probably be able to use ClockworkMod or similar tools to install them.

Cobroto’s custom ROM isn’t quite that dramatic, but it could save you the trouble of hacking your own tablet… assuming you’ve already hacked it far enough to run ClockworkMod (by enabling support for third party apps and rooting the NOOK Tablet).

Cobroto’s ROM is based on the stock Barnes & Noble NOOK Tablet 1.4.1 software. It’s pre-rooted, so you don’t need to root the tablet again yourself after installing it. It also includes some of the most popular NOOK Tablet modifications available so far:

The ROM also gives you clock, calendar, and calculator apps and replaces the stock email app with the CyanogenMod email app and includes a few other changes.

Installing the custom ROM will erase all of your existing data, so you’ll want to backup your apps or settings before using it. You can do that with Titanium Backup.