The Barnes & Noble NOOK Tablet may be showing its age when compared with newer, faster tablets with higher-resolution displays like the NOOK HD. But B&N’s 7 inch tablet from 2011 keeps learning new tricks.

A few months ago developers ported an unofficial build of CyanogenMod 10.1 to run on the NOOK Tablet, bringing Android 4.2 to the aging device. Now you can remove the unofficial label – there are official nightly builds of CM10.1 available for the NOOK tablet. 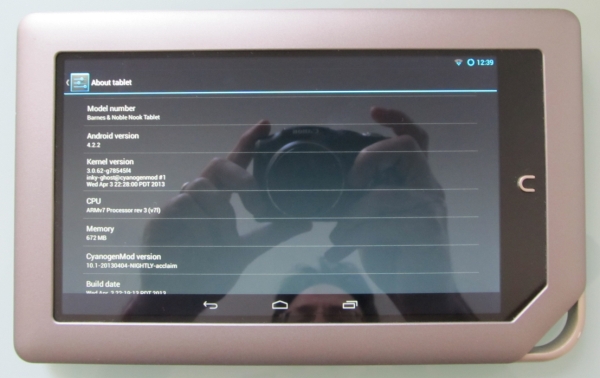 The NOOK Tablet features a 7 inch, 1024 x 600 pixel display, a 1 GHz TI OMAP 4430 dual core processor, 1GB of RAM, and up to 16GB of built-in storage. Unlike the original Amazon Kindle Fire tablet, the NOOK Tablet also has microSD card slot and microphone.

It also has a large plastic bezel which isn’t the prettiest thing you’ve ever seen, but which makes the tablet easier to hold in one hand during extended reading sessions than many 7 inch tablets.

While B&N no longer sells the NOOK Tablet, you can pick up refurbished or open models for $120 or less.

The tablet originally shipped with B&N’s custom version of Android 2.3 Gingerbread. But by installing CyanogenMod 10.1 you can update it to Android 4.2 giving it a distinctly more Google-flavored look and feel.

Switching to CyanogenMod also frees you from the B&N shop, letting you install the Google Play Store or other app stores so you can download and run hundreds of thousands of Android apps (probably not all at once). You can even install the Kindle app on a NOOK tablet if you prefer B&N’s hardware, but Amazon’s eBook store.

Developers Kuzma30, chmhoffman, and Hashcode are responsible for much of the work that went into porting CyanogenMod 10.1 to the NOOK Tablet. You can read more about the project in an xda-developers forum thread.

Installing a custom ROM on the NOOK Tablet can be a bit tricky if you haven’t done it before (if you have, all you need to do is download the latest nightly and flash it with TWRP, ClockworkMod, or another custom recovery). The easiest way to install a custom recovery on a NOOK tablet running stock software is probably to prepare a bootable microSD card.

One reply on “NOOK Tablet gets official nightly builds of CM10.1 (Android 4.2)”