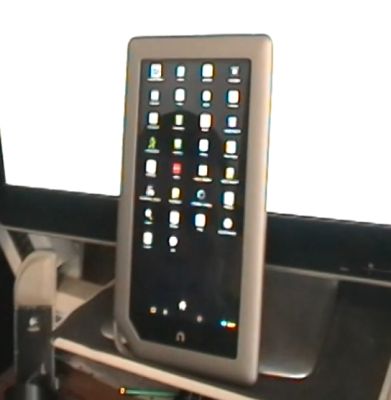 Now that hackers have bypassed the secure bootloader on the Barnes & Noble NOOK Tablet, the real fun begins. NOOK Tablet hacking is still in the early phases, but developers have already figured out how to load a working ClockworkMod Recovery onto the tablet so that users can backup and restore software or flash custom software on the tablet.

Developers are also working on booting software directly from a microSD card. This could eventually allow you to install CyanogenMod 9 with Android 4.0 Ice Cream Sandwich on an SD card and run it without erasing the stock Barnes & Noble version of Android that comes installed on the device.

AdmOutler has released a lengthy proof of concept video showing the NOOK Tablet booting from a microSD card. It’s still a work in progress and not a complete ROM, but he has posted the tools to make a bootable SD card and instructions for using them.

You can also find instructions for installing ClockworkMod at xda-developers thanks to developer nemith.

The NOOK Tablet is a $249 tablet from Barnes & Noble with a 1 GHz TI OMAP 4 dual-core processor, a 7 inch, 1024 x 600 pixel IPS display, and 16GB of storage. The Barnes & Noble software is based on Google Android 2.3 Gingerbread, but out of the box the tablet is designed to run apps and read books downloaded from the B&N shop. Hackers have been trying to find ways to make the NOOK Tablet work more like a general purpose Android tablet.