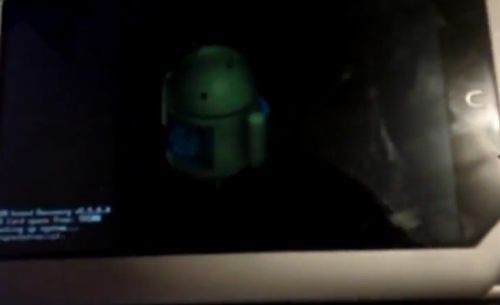 The Barnes & Noble NOOK Tablet is a $249 Android tablet with a 7 inch, 1024 x 600 pixel IPS display, a 1 GHz TI OMAP4 dual core processor, 16GB of storage, and a microSD card slot. Until the Asus Eee Pad MeMo is released later this year, it’s probably the nicest Android tablet you can buy for the price.

But Barnes & Noble doesn’t position the NOOK Tablet as an Android tablet, per se. Instead it’s a NOOK Tablet tied to the NOOK eBook store and app store. While some of the first people to pick up the NOOK Tablet in November learned that they could easily install third party apps from outside sources, Barnes & Noble quickly disabled that feature — and officials from the company tell me it was never supposed to be there in the first place. It was a bug, not a feature.

That hasn’t stopped hackers from looking for ways to run custom code on the NOOK Tablet to make it into more of a general purpose device. People have been dual-booting Ubuntu Linux, CyanogenMod 7, and other alternate operating systems on the NOOK Color since that device was released in 2010. But the NOOK Tablet has presented more of a challenge, due to the fact that the bootloader is securely locked.

Now independent developers have found two different methods for bypassing the bootloader to run custom code on the NOOK Tablet. It will still be a little while before we start to see anything as crazy as CyaogenMod 9 (based on Google Android 4.0) running on the tablet — but it is possible to install ClockworkMod Recovery, custom kernels, or some other software.

One method relies on a modchip right now — which is an actual piece of hardware that needs to be connected to the tablet. But another method simply allows you to install software on a microSD card, insert it into the NOOK Tablet, and boot from the SD card instead of the primary storage.

Neither method is really ready for the general public yet. But you can follow the progress at the xda-developers forum. In the meantime, you can check out these two videos to see some of the things that are already possible.

Update 1/12/2012: The NOOK Tablet can now be booted from a microSD card and it can run ClockworkMod Recovery. These projects are still in the early testing stage though.