As expected, Barnes & Noble’s latest financial results show a dip in revenue from the NOOK division. The company brought in $316 million in the last quarter from NOOK eReader, tablet, and digital content sales — but that’s a 26-percent dip from the same period a year earlier.

But while the company says it’s “calibrating its business model” and implementing a “cost reduction program” to bring down expenses, Barnes & Noble isn’t going to stop selling tablets or eReaders anytime soon. 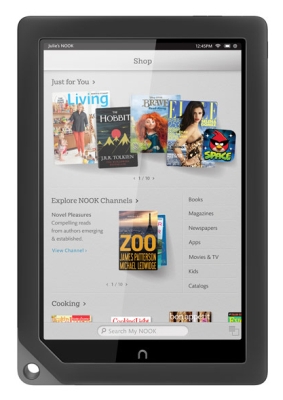 The company says it remains committed to the category… which makes sense because:

Earlier this week Barnes & Noble launched a promotion allowing customers to get a $50 credit to spend on NOOK content when they buy a NOOK HD+ tablet for $269.

Will that be enough to turn things around for NOOK? Probably not. But it certainly can’t hurt.

The latest NOOK tablets are actually pretty great little devices which sell for pretty great prices. Unfortunately they have to compete with some at-least-equally-great products from Amazon, Asus, Apple, and others.

I wouldn’t be surprised to see B&N focus more on getting customers who own those tablets to install the official NOOK apps on those devices to purchase and read digital books, magazines, and other content. But the best way to lock customers into your ecosystem is undoubtedly to get them to buy your hardware, even if you have to sell it at or near cost.

One reply on “NOOK revenue falls, B&N is “making adjustments but “remains committed” to eReaders, tablets”