As Barnes & Noble prepares to pull the plug on its NOOK HD and NOOK HD+ tablets, the company is expanding its fire-sale pricing overseas.

You can now pick up a NOOK HD for £99 and up in the UK, or a NOOK HD+ for as tarting price of £149.  Barnes & Noble says these prices are only good through July 31st, but if they’re anything like the recent sales in the US, they’ll probably be extended indefinitely… or at least until B&N is sold out of tablets altogether. 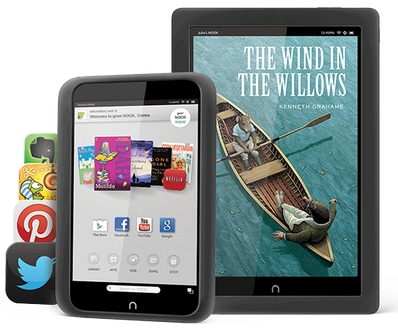 Eventually the company plans to stop making its own tablets and instead partner with outside companies to pre-load the NOOK apps for buying and reading eBooks and magazines on their tablets. Some may even be co-branded with the NOOK name, but they won’t be designed and built by the bookseller.

Meanwhile, the company is working to improve its mobile apps for iOS and Android, suggesting that B&N still sees a future in digital media sales (whether or not customers see a future for B&N).

The latest NOOK app for Android adds support for HD magazines on tablets with 1280 x 720 pixel or higher resolution displays, as well as additional magazines in the catalog including Wired, Vanity Fair, and GQ. The app also offers improved accessibility options including screen magnification and improved text-to-speech features.

The latest NOOK iOS app also supports HD magazines and adds support for NOOK Comics with ZoomView, among other things.