It’s been almost two and a half years since Barnes & Noble released the NOOK Color, and it’s been over a year since the company stopped offering any significant software updates for the 7 inch tablet. But just because the NOOK Color has been discontinued doesn’t mean you can’t teach an old color eReader new tricks.

The NookieDevs team has released an alpha build of CyanogenMod 10.1 for the NOOK Color, bringing a first taste of Android 4.2 Jelly Bean to the aging tablet.

That’s good news if you’ve already got a NOOK Color lying around — or even if you don’t. You can pick up a pre-owned NOOK Color from CowBoom for just $60, or  pick up a used or refurbished model from eBay for $100 or less. 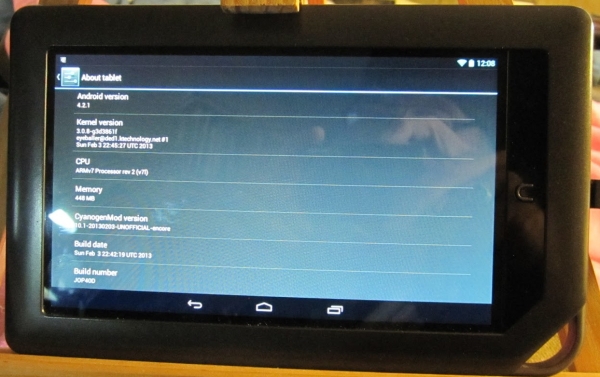 CM10.1 doesn’t run quite as well on the NOOK Color as CyanogenMod 10 (which is based on Android 4.1), and the developers warn there are some performance issues and bugs. But seeing as Barnes & Noble doesn’t support anything newer than Android 2.2 on the NOOK Color, it’s impressive that Android 4.2 runs at all.

Like many earlier unofficial builds of Google Android fro the NOOK Color, you can either install CM10.1 to the device’s built-in storage or install it to a microSD card so you can dual boot the official B&N software or CM10.1 simply by inserting or removing the storage card.

While that hardware is a bit dated, hackers have been able to get every major version of Android to run on the NOOK Color.

8 replies on “NOOK Color gets Android 4.2 with CyanogenMod 10.1 Alpha”