Nokia’s latest Lumia phone has the same Qualcomm Snapdragon S4 dual-core CPU, 1GB of RAM, and 8.7MP PureView camera as the Lumia 920. But the new Nokia Lumia 925 is thinner and lighter than its predecessor, has an aluminum frame, and a glass camera lens.

If you’re in the market for a Windows Phone handset, this might be one of the best options available — but it still doesn’t have some of the features you’ll find in Android and iPhone competitors (such as higher-resolution displays, quad-core processors, or wider app selection).

And while Nokia plans to offer the Lumia 925 around the globe, in the US it’ll only be available from T-Mobile at launch. 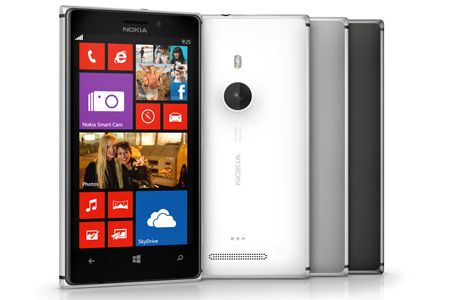 The Nokia Lumia 925 features a 4.5 inch, 1280 x 768 pixel AMOLED display, a 1.5 GHz dual core CPU, a 1.2MP front-facing camera, and Nokia’s PureView camera on the back with optical image stabilization, autofocus, and an LED flash.

By moving from a plastic shell to aluminum, Nokia has reduced the size and weight without using a smaller battery or taking other shortcuts. The Lumia 925 measures 5.1″ x 2.8″ x 0.3″ and weighs just 4.9 ounces.

Microsoft’s Windows Phone Store has over 145,000 apps available for download these days, but the store is still playing catch up to the Google Play Store and Apple’s App Store, which each have closer to three quarters of a million apps.

Quality is more important than quantity, and many top tier app makers offer Windows Phone versions of their apps, so the discrepancy doesn’t matter as much today as it did a year or so ago. But you’ll still probably want to take a look at the app selection before plunking down any cash on a Lumia phone.

Nokia plans to offer an unsubsidized model of the Lumia 925 in Europe for about $600, while it’s expected to sell for around $100 in the US when customers sign up for a T-Mobile plan that spreads the price of the phone out over the course of a 2-year service plan.