Nokia is reportedly preparing to launch a low-end smartphone running Google Android soon. That’s kind of a big deal for a company that’s tied its fortunes with Microsoft’s Windows Phone software over the past few years… and which is currently in the process of being acquired by Microsoft.

But it’s not like Nokia doesn’t have a history with other operating systems. The company may have discontinued its Symbian and MeeGo products, but it currently offers a line of low-cost Asha smartphones with custom software, and Android would probably be a step up.

While Nokia isn’t expected to make any official announcements until Mobile World Congress in late February, a Vietnamese retailer has already posted a product page for the Nokia X A110. 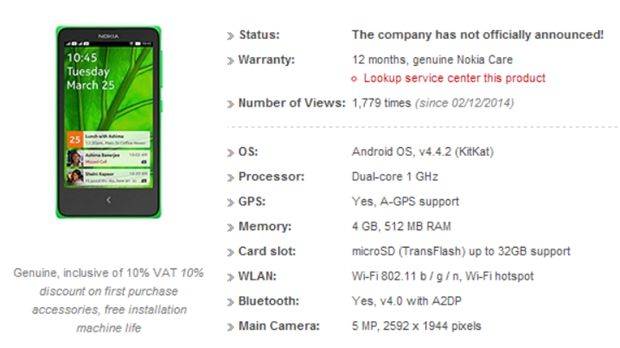 Take the information with a grain of salt, since the product page says “the company has not officially announced” the phone. But if you can believe any of the information that follows, the phone could feature a 4 inch, 854 x 480 pixel display, a 1 GHz Qualcomm Snapdragon 200 dual-core processor, 512MB of RAM and 4GB of storage. It runs Android 4.4 KitKat software.

While those specs are nothing to write home about, Android is designed to run on a wide range of hardware — and the key difference between a budget phone running Android and one running Nokia’s Asha oftware is that Android phones can run about a million apps available from the Google Play Store (assuming Nokia’s phone is a Google certified device).