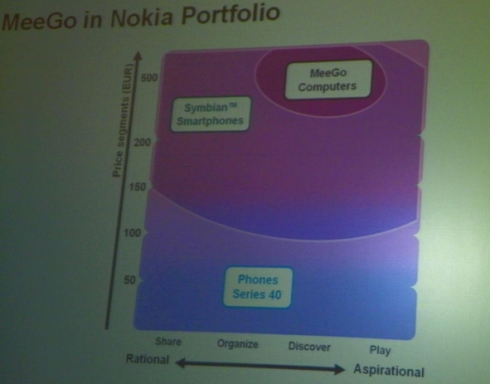 Nokia plans to launch one of the first phones running the new MeeGo operating system by the end of the year. That’s not a huge surprise since Nokia was the driving force behind the Maemo Linux operating system that powered several earlier phones… and which has now been folded into the MeeGo project. But Nokia is now pretty much confirming plans to sell several other devices running MeeGo including netbooks and tablets.

According to The Wall Street Journal, Nokia mobile solutions head Anssi Vanjoki says that Nokia plans to move beyond the phone space and will launch other MeeGo devices “such as tablets.”

And Netbook News snapped some photos from a Nokia presentation at a recent even showing plans to build “MeeGo Computers.” The product rodmap suggests that the MeeGo 1.1 Netbook, Tablet, Handset, and in-car-infotainment user experience could all be ready to go before year’s end. It’s not entirely clear from the slides whether Nokia is actually committing to building products in each of those categories, or just acknowledging that the MeeGo team is optimizing the software for each of those devices. But there is mounting evidence that Nokia will at least bring a MeeGo tablet to market at some point.