The Nokia G20 is a budget smartphone with a MediaTel Helio G35 processor, 4GB of RAM, 128GB of storage, and a 6.5 inch, 1600 x 720 pixel display. But the most interesting thing about this phone might not be its specs, but rather its support guarantee. It’s an inexpensive phone that will receive Android OS updates for at least two years and security updates for at least three.

That means that if you buy a Nokia G20 this summer, your phone will be able to run Android 13 when it’s released, and it should still be receiving security updates in 2024. 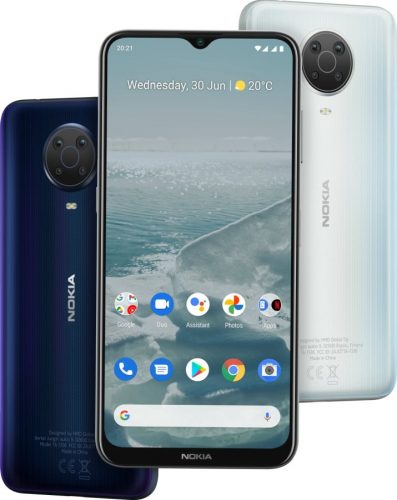 When HMD first launched the phone earlier this year, it was scheduled to hit the European  market for €159 and up. Now the phone is coming to North America – it will be available starting July 1 for $199.

Like all Nokia-branded G series smartphones, the phone promises long-term support (by Android standards, anyway) thanks to monthly security updates. And it also promises long battery life with up to three days of run time on a charge. You can thank the phone’s 5,050 mAh battery for that, although the low-res display probably plays a roll as well, since it’s less power-hungry than some other smartphone screens.

Other specs are generally unsurprising for a budget Android phone sold in 2021: