The Nokia 150 cellphone is coming in early 2017. It’s the first phone from HMD Global, the new company formed by former Nokia executives that plans to begin selling Nokia-branded smartphones with Android software next year. But the Nokia 150 isn’t an Android smartphone.

It’s a cheap feature phone that will sell for $26 when it hits Europe, India, Africa, the Middle East, and Asia Pacific regions in the first quarter of 2017.

The Nokia 150 has a design that’s reminiscent of a classic Nokia phone, runs Nokia Series 30+ software, and features a 1,020 mAh battery that should be good for up to 22 hours of talk time or up to a month of standby time. 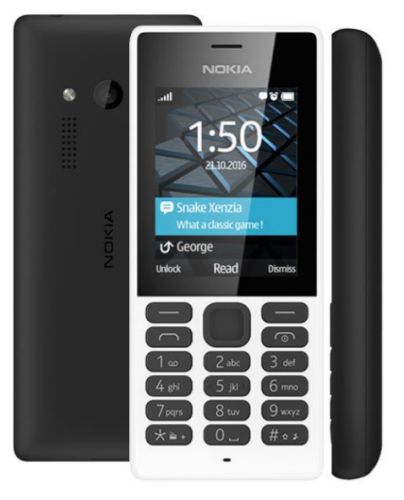 HMD will offer single-SIM and dual-SIM versions of the phone. Both have a 2.4 inch, 320 x 240 pixel display, a numeric keypad, a micro USB charger, and a microSD card with suppor tfor up to 32GB of removable storage.

The phone has a 3.5mm headphone jack and supports Bluetooth 4.0. There’s a VGA camera on the back with LED flash. And the Nokia 150 has apps including an MP3 player, video player, and LED flashlight feature. There’s also FM radio support and games including a Snake title and Nitro Racing from Gameloft.

While HMD eventually plans to bring higher-end phones to market, the Nokia 150 is very much a budget device with relatively cheap hardware and limited functionality for doing anything more than making phone calls or sending text messages. It supports 2.5G wireless networks and there aren’t currently any plans to even offer the phone in the US.

On the other hand, leaving out a lot of the modern features found on smartphones is what allows feature phones like the Nokia 150 to offer crazy long battery life (or crazy by 2016 smartphone standards, anyway).