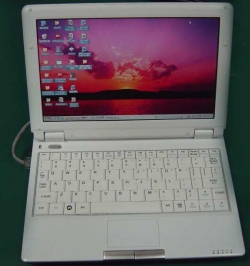 I managed to get a few more details about the NorhTec Gecko EduBook netbook. You know, the one I told you about yesterday that can run on AA batteries. First, it looks like being able to run on AAs isn’t the same thing as being able to run on alkaline batteries. The netbook will be designed to use either NiMH or Li-Ion batteries. The NiMH version will use AA batteries, while the Li-Ion version may use a more traditional battery pack, which NorhTec says may be able to run for as long 16 hours, which is about 4 times longer than the NiMH version.

But the advantage of using AA NiMH batteries instead of a more traditional battery pack is that replacement batteries are much cheaper and easier to find. So if you need to replace a dead set of batteries or just want to carry around some extra battery power with you, it should be easy to pick up some batteries wherever you are.

Right now NorhTec is working to make these laptops available in Africa. The goal is to ship some barebones units without flash storage, WiFi, or batteries. This will bring the cost, including shipping, down to about $160. Then recipients can setup the netbooks by adding an SD card or other storage, batteries, and WiFi modules if necessary. Because of the EduBook’s modular nature, it should take just a few minutes to set up a system.

I asked whether NorhTec plans to make the EduBook available in developed markets as well. After all, the OLPC XO Laptop was designed for students in developing nations, but the group has managed to sell a small number of the laptops in the US and Europe in a handful of special “give one get one” events. I imagine the EduBook could be even more appealing due to its modular/hackable nature and unique battery system. A NorhTec representative replied that while the company is focused on the developing world, it would be happy to sell the laptops anywhere.