Next year Nintendo plans to launch a game console designed to work either as a handheld gaming device or as a system that you plug into a TV and interact with using a wireless controller. But those might not be the only ways to use the Nintendo Switch.

A member of the NeoGaf forum found Nintendo’s patent application for the Switch. Along with describing a system that looks an awful lot like the one Nintendo recently unveiled, the patent documents show one unannounced accessory: a headset. 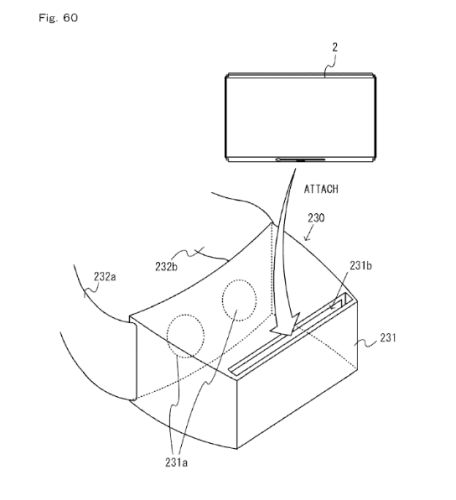 We already know the Nintendo Switch has three components: a  tablet, a docking station (for charging and connecting a TV), and a gamepad (which can be split apart to attach gaming buttons to the left and right sides of the tablet.

What we weren’t expecting to see is a headset with a slot for the tablet in the front.

It’s described as an “example HMD accessory,” or head mounted display, but this isn’t a standalone display like Sony’s PlayStation VR or Facebook’s Oculus Rift. Instead, it’s more akin to the Samsung Gear VR, Google Daydream View, or Google Cardboard headsets, which all use smartphones for their displays.

It’s not clear if there would be any significant head-tracking capabilities, but since the Switch already comes with wireless controllers, it’d be relatively simple to allow users to control games, videos, or other content even when they can’t touch the touchscreen tablet itself.

The Nintendo Switch is a lot bigger than a typical smartphone, which makes me wonder how comfortable it would be to wear a headset big enough to house it. But there’s no guarantee that Nintendo will ever actually release the headset.

Companies often apply for patents on products that they never release, in an effort to preemptively protect their intellectual property. In this case we can be pretty sure that Nintendo does plan to launch the tablet/dock/controller for the Switch, because the company has already started showing those off. The headset? That may be another story.