At a time when PC sales are stagnant and smartphone sales continue to rise, it’s probably not surprising to learn that people in some areas are spending more time with their phones than PCs. But audience research firm Nielsen has some solid numbers to back up that theory… well, somewhat solid.

According to Nielsen, folks in the US spent an average of 34 hours using their phones in December, compared with about 27 hours using a PC to connect to the internet. The gap was even wider in the UK and Italy. 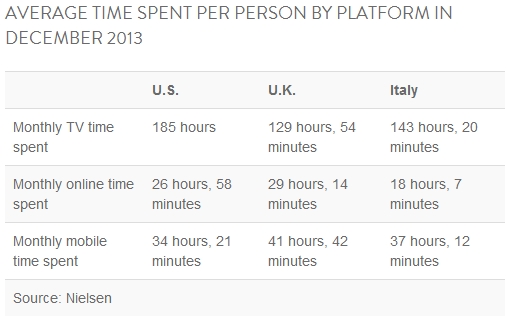 Nielsen says Italians spent an average of 37 hours on their phones compared with just over 18 hours of online PC time in December.

Take those figures with a grain of salt, since the data comes from a select group of people who opted to run Nielsen’s on-device meters. Nielsen is also comparing all time spent with a smartphone to time spent online with a traditional PC. But two things seem pretty clear: at least some portion of the population is spending more time interacting with pocket-sized internet devices than the type that sits on your lap or desk.

They’re also using their phones more than they used to — in December 2012, for instance, Nielsen says the average US smartphone owner used their device to access mobile websites and apps about 5 times a day. A year later that number was up to 7 times a day.

One other thing stands out from Nielsen’s chart though: We all still spend much more time glued to the TV than we do to any of the smaller screens in our lives, with the average person in the US watching 185 hours of television. That’s a little over a third of our waking hours.