Children’s TV provider Nickelodeon is launching a new subscription-based streaming video service that will let toddlers (or adults with childish tastes) watch kid’s shows on a smartphone or tablet.

Noggin launches March 5th, and subscriptions for the ad-free service run $5.99 per month. 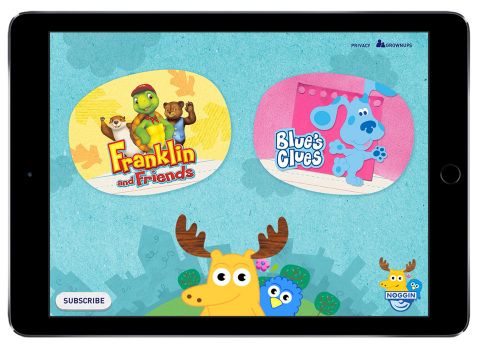 At launch Noggin will be iOS-only, which means you’ll need an iPhone, iPad or iPod touch to use the service. An Android app is also in the works.

Noggin subscribers will be able to stream shows including Blue’s Clues, Little Bear, and Ni Hao, Kai-Lan, along with music videos and other long and short-form content. But some of Nickelodeon most popular shows such as Dora The Explorer won’t be included, at least not initially.

Nickelodeon is also discussing the possibility of bundling Noggin with cable or satellite TV packages as an add-on service. But part of what sets Noggin apart from the company’s existing Nick Jr. mobile app is that you don’t need to be a paying TV subscriber to use Noggin.

There’s a growing amount of kid-friendly content on other services including Netflix and Amazon Instant Video. This week Netflix announced plans to launch several new kid’s shows including reboots of classic cartoons Danger Mouse and Inspector Gadget, while Amazon announced it will release second seasons of some of its kid’s shows.

But it’s always nice to have options… although the fees for cord cutting could start to add up if you decide to subscribe to Amazon, Netflix, Hulu Plus, Nickelodeon, HBO’s upcoming streaming video service, Sling TV’s live video streaming service and other options aimed at cord cutters. Pretty soon cable could start to look like the cheaper option.

via TechCrunch and The AP