Google’s new Nexus 7 tablet hit the streets this week. And almost immediately folks figured out how to install a custom recovery and root the tablet.

Meanwhile, some folks tore apart the 2013 Nexus 7 tablet to see if it’s really what’s on the inside that counts, and they found a few surprises under the hood. 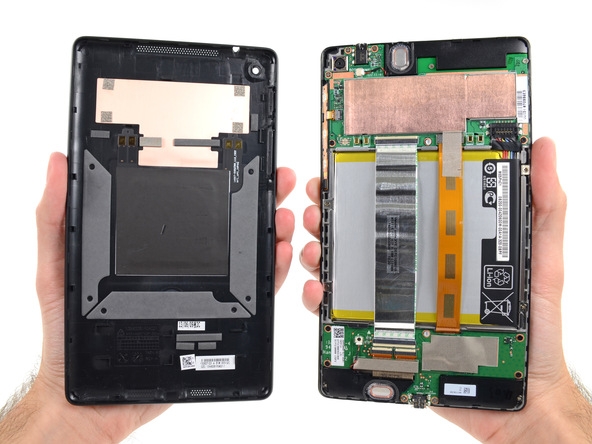 Want to run apps like Titanium Backup which require root permissions? Then you’ll need to root your tablet — and fortunately that’s pretty easy to do.

All you need to do is flash a custom recovery for the Nexus 7 and use it to flash SuperSU.

Once you have a custom recovery, you can also use it to backup or restore your tablet, flash other software updates, or even install custom ROMs. I suspect it won’t be long before we see CyanogenMod and other custom versions of Android ported to the 2013 Nexus 7.

Android Police has instructions and download links to help you install TWRP recovery and SuperSU on the Nexus 7. Note that the tablets aren’t quite beginner-friendly. You’ll need to install the Android SDK, or at least fastboot, on your computer before you get started.

Hey, is that a wireless charging coil?

You may recall that before the Nexus 7 was officially unveiled, there was evidence that it might include support for wireless charging.

Google glossed over that detail during its press conference this week, but the official Nexus 7 website does mention wireless charging, and sure enough when you open the case, there’s an inductive charging coil inside.

The folks at iFixit found it when they dissected the tablet to see if they could put it back together again (they’re a repair shop, so that’s the sort of thing they like to do).

While iFixit didn’t find any other major surprises, the team at the repair shop was pleasantly surprised with how easy it was to open the case and get at the insides. They assigned the 2013 Nexus 7 a repairability score of 7 out of 10, meaning that it should be relatively easy to open it up and conduct minor repairs — although fixing broken glass could be expensive, since the glass is glued tightly to the LCD.

Faster than a speeding Google Nexus 4

On paper it looks like the Google Nexus 7 tablet has nearly the same hardware under the hood as last year’s Nexus 4 smartphone. Both have Snapdragon S4 Pro chips, and both have 2GB of RAM.

But AnandTech reports that while the Nexus 4 (and most S4 Pro devices to date) have Qualcomm’s Krait 200 CPU cores, the 2013 Nexus 7 has Krait 300 CPU cores.

AnandTech suggests that the new chip is kind of like a moderately underclocked Snapdragon 600 chip.

In other words, the new chip has more in common with the processors found in this year’s top phones like the HTC One and Samsung Galaxy S4 than the Snapdragon S4 Pro found in last year’s Nexus 4 smartphone.