Google released two Nexus smartphones in 2015: a Nexus 6P with a 5.7 inch screen and a Nexus 5X with a 5.2 inch display. Both ship with Android 6.0 software, Nexus Imprint fingerprint scanners, and high-quality cameras that work well in low-light.

But the Nexus 6P also has more RAM and a faster processor than the Nexus 5X. So the larger, more expensive model can support a few software-based camera tricks that the Nexus 5X cannot… or at least that’s what Google said when the company released the phones.

It turns out that you can edit the Nexus 5X settings to enable support for one feature the smaller phone was missing: EIS (electronic image stabilization). 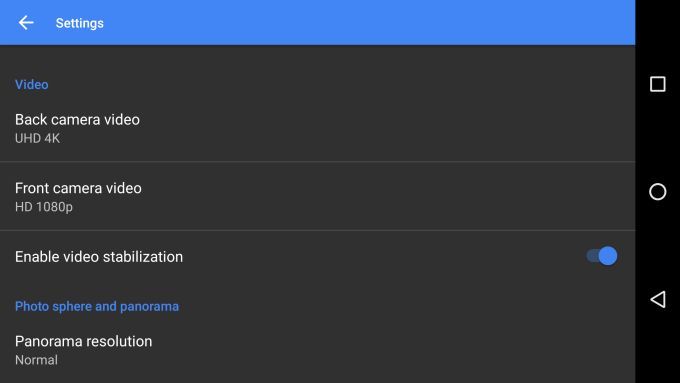 While some phones include optical image stabilization hardware which helps keep your photos and videos steady while your hand shakes, the Nexus 6P does the same thing with EIS software. Google says the Nexus 5X doesn’t have a powerful enough processor to handle EIS.

But all you have to do to enable the feature is add one line to the phone’s Build.prop file:

You’ll either need a rooted phone or an unlocked bootloader to do that. Once it’s done, just reboot your phone and fire up the camera app. You should see an option to enable EIS in the camera settings.

Note that if you modify the Build.prop file your phone will no longer be able to install over-the-air software updates from Google. You’ll need to download and install updates manually or re-flash the stock system partition to get OTA updates again. If you’re not comfortable doing those things, you should probably avoid this hack.

But it’s interesting to note that while Google said the Nexus 5X wasn’t powerful enough to handle EIS, a number people that have enabled it seem to be pleased with the results.

Now if only there was a Build.prop tweak that would give the Nexus 5X more RAM or better performance. When I reviewed the Nexus 5X in October I was very impressed with the phone’s camera and fingerprint sensor and found the battery life to be an upgrade from my Nexus 5, the phone frequently felt slower than my 2013 smartphone which is why I decided not to upgrade this year.