Tired of running out of storage space on your smartphone? There’s a new phone that could offer practically unlimited storage… kind of.

Nextbit is a startup founded by former Google and HTC employees, and the company’s first smartphone is called the Robin. It has 32GB of built-in storage, but what really makes the phone special is that it comes with 100GB of cloud storage… and if users need more space, Nextbit could up that number in the future. 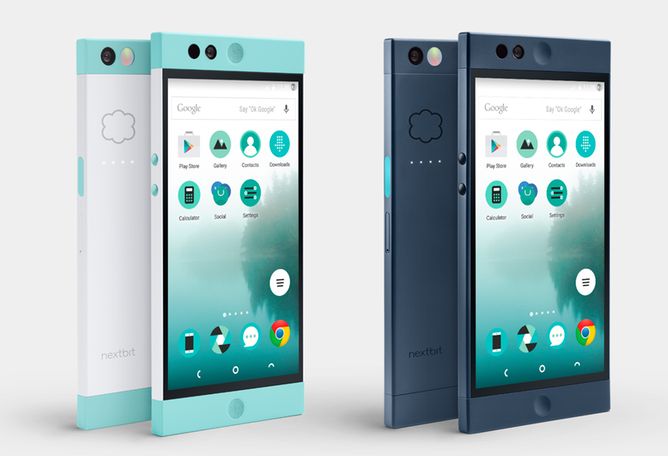 The cloud storage is included in the cost of the phone. There’s no time limit or subscription. And Nextbit leverages the online storage in an interesting way: it analyzes the apps and data you use most and keeps them on your device. Less frequently used items are automatically stored in the cloud.

That means when you scroll through your list of apps, you might see some gray icons for apps that aren’t currently on your phone. But tap a button and the Robin will download the app for you… along with settings and data. There’s no need to login to your accounts over again, for instance.

You will have to wait for the app to download before you can use it though… so it’s a good thing that Nextbit says it will only offload apps you don’t use frequently and it’ll only do it when you need the local storage space for video recordings or other files.

While this is hardly the first solution for backing up data to the cloud, it seems to be one of the most comprehensive. Google Photos can automatically backup photos from your phone, as can Apple’s iCloud service. Or you can install third-party apps such as Amazon Photos or Dropbox to do something similar.

But Nextbit’s Android-based software backs up everything, including photos, music, documents, and apps.

The Robin is Nextbit’s first phone to emphasize cloud storage, but the developers actually released a less ambitious phone called the Nextbit Baton last year and they’ve been involved in the production of phones including the HTC One M7 and M8, along with earlier phones including the HTC Evo and G1. And Foxconn is manufacturing the Robin for Nextbit.

There’s a fingerprint sensor, NFC, quick charging, a USB Type C connector with support for USB 3.0, and support for 802.11ac WiFi, Bluetooth 4.0, NFC, and GSM 3G and 4G LTE networks. Nextbit plans to ship the phone with the latest version of Android, which will be either Lollipop or Marshmallow, depending on which version of Google’s operating system is available at the time.

Nextbit says the retail price of the phone will be $399, but backers of the company’s Kickstarter campaign can request one for a pledge of $349… and the first 1,000 backers can try to snag one for $299.

On paper, the phone seems to have hardware that’s competitive with the upcoming, rumored LG Nexus 5 2015 smartphone, and unless Google has a big surprise up its sleeve, the price seems competitive as well.

But odds are that the new Nexus 5 will be available sooner than the Robin: Nextbit says its phone won’t begin shipping until early 2016. The estimated delivery date for the early adopter units is January, 2016, with other units slated to ship a month later.

7 replies on “Nextbit Robin smartphone has lots of (cloud) storage”