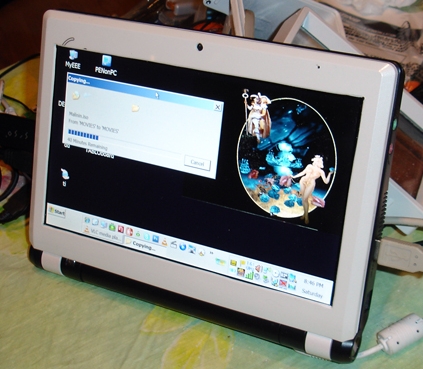 When the the Asus Eee PC 701 was introduced in 2007, it was arguably the first consumer-oriented netbook (the OLPC was designed for educational purposes, not the general public). But now Asus has plenty of company in the netbook space. And in order to keep competitive, the company is keeping an eye on the market and aggressively launching products in a number of new spaces including network attached storage devices, home theater media streaming devices, eBook readers, and the bizarre computer-in-a-keyboard Eee Keyboard.

It’s too early to say which, if any, of these devices will gain traction in the marketplace. But Asus seems to be taking a throw-it-against-the-wall-to-see-what-sticks approach to product launches. And next up? A web tablet featuring a 4 to 7 inch touchscreen, according to DigiTimes.

The Eee Pad is reportedly the company’s response to the upcoming Apple Tablet, although Asus will likely sell the Eee Pad at a much lower price. And it won’t run OS X (at least not out of the box). Of course, Apple isn’t the only company with a touchscreen tablet in the works or already available. Like eBook readers, there’s a growing trend of PC makers launching mini-computers without keyboards. What remains to be seen is whether there’s sufficient consumer demand for these devices to sustain the market.

There’s not a lot of additional information about the rumored Eee Pad at the moment. DigiTimes simply says that it will “offer a combination of tablet PC and MID functions.”

5 replies on “Next up for Asus: An EeePad tablet PC?”