Russian phone maker YotaPhone introduced one of the most unusual Android phones late last year with the introduction of a dual-screen handset with a color display on one side and an E Ink screen on the other.

Now YotaPhone is getting ready to launch a next-generation model. This time both displays feature touchscreens, letting you use the low-power, sunlight viewable ePaper display as your primary screen if you want. 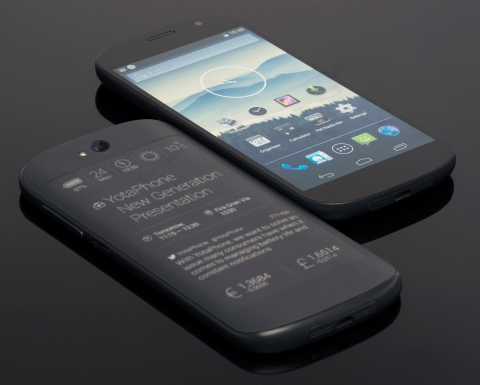 Since E Ink screens only use power when the page is refreshed, you can leave an image or text on the always-on display indefinitely. It also means that if you use the E Ink screen to make calls and perform other basic phone functions, you should get significantly longer battery life.

In fact, YotaPhone says the phone’s 2550mAh battery should provide up to 50 hours of run time if you’re using the device to read eBooks (presumably in airplane mode).

The ePaper display doesn’t refresh the screen as quickly as the color display, has a lower resolution, and only shows shades of gray. So it’s probably not the screen you’ll want to use to watch videos or run games. But it’s nice to have options.

The phone supports 802.11ac WiFi, Bluetooth 4.0, NFC, USB 3.0, and GPS and it’s expected to ship with 2GB of RAM, a Qualcomm Snapdragon 800 processor and the latest version of Android… whatever version that is when the phone actually hits the streets.

While those specs look decent, it’s clearly the E Ink display that helps this phone stand out — and by now that it’s a true secondary display for most apps on the phone, the next-gen YotaPhone combines some of the best features of an Android phone and a dedicated eReader like a Kindle. The first-generation YotaPhone didn’t have a touch panel for the E Ink display and you could only use that display with certain apps.